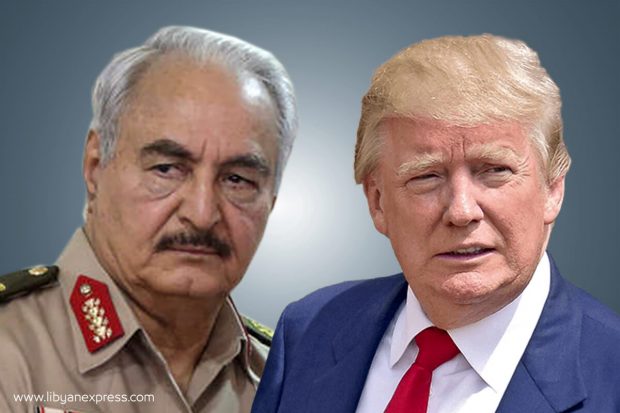 Amid retreats, hundreds of deaths and injuries as well as captives, Libya’s “weakman” Khalifa Haftar was barley surviving his ill-considered offensive of the Libyan capital, Tripoli, when he got the phone call that breathed life into him and thus his forces; hence making him the strongman he wishes to be.

The epic phone call from the US President, Donald Trump was announced last Friday by the White House, which said that Trump hailed Haftar’s efforts in fighting terrorism in Libya; the call was announced hours after the US said it had obstructed, along with Russia, a UK-drafted resolution at the Security Council to condemn Haftar’s attack and call for immediate ceasefire as well as a retreat of forces to their previous positions.

To all appearances, the call was made to reflect the US policy that encourages the fighting against extremism and terrorism; however, this time the US did not get it right as its Secretary of State Mike Pompeo has already spoken against Haftar’s operation in Tripoli, saying his forces must cease fire and return to their status quo positions.

But with a closer look at the situation on the ground in Tripoli, since the call, which was made on Monday, Haftar’s forces appeared to be very indifferent with their use of indiscriminate shelling and Grad launchers, and with the passing of time, Haftar’s Air Force got involved in night attacks and carried out airstrikes on different locations in the city.

The sheer telephone call was more than enough for Haftar to give orders to his forces to attack several residential areas in Tripoli, including Abu Salim, and leave behind a number of deaths and injuries among civilians, which makes Libyans wonder whether or not Trump is pro-democracy as in the Libyan case he is siding with a military man trying to grab power through war and destruction in the name of fighting terrorists. To them, these terrorists seem to be the same group the US is backing as the internationally-recognized government of national accord in Libya.

This Fluctuation of the US policy is fine at home, where the only consequences would be differences of opinion, but away from home; here in Libya, this fluctuation cannot be Washington’s stance as it has helped embolden Haftar and his backers – UAE, Saudi Arabia and Egypt, let alone Russia – to wage an all-out war that could last for months and lead for thousands of casualties; therefore shelving every last ray of hope for democracy and rule for the fittest.

The views expressed in Op-Ed pieces are those of the author and do not purport to reflect the opinions or views of Libyan Express.
How to submit an Op-Ed: Libyan Express accepts opinion articles on a wide range of topics. Submissions may be sent to oped@libyanexpress.com. Please include ‘Op-Ed’ in the subject line.
HaftarLibyaTripoliTrump
Share
Submit a Correction
Sign up for our Newsletter.

Another mass grave with 7 bodies found in Tarhouna

For: Battle for Libya’s capital after Trump’s call with Haftar will be very long