UN and the West cherish a warlord in Libya 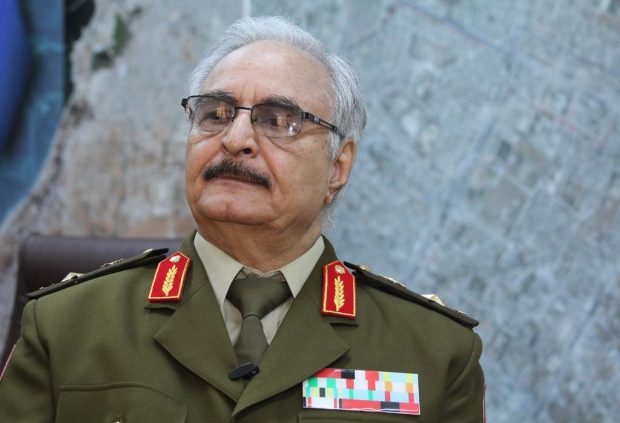 Now as never before, democracy and freedom in Libya seem a bit far-fitched as they both have a had a pretty much rough road post-Gaddafi’s death.

Since 2012, every political move Libyans were making was accompanied by a military tactic and a violent scheme along the way by those who saw an opportunity in the political vacuum after the revolution of February 17, and left no stone unturned to seize that opportunity.

One of the violent figures who has been, according to reports from both local and international legal organizations, derailing the political process in Libya for the last four years is Khalifa Haftar – a former Gaddafi army officer, a captive in Chad-Libya war, then a renegade general living in the US. Now, he is a warlord based in eastern Libya and commanding a self-proclaimed national army.

Haftar’s name has been hardly missed from the Libyan political process in the last three years at least, despite the fact that he has no political position under the UN-brokered Libyan Political Agreement (LPA) that was signed on December 17, 2015 in Morocco’s Skhirat.

Interesting enough, Haftar has since been a very significant party for the UN and western countries, especially the US, France and Russia, in every round of dialogue, meetings and political conference aiming to find a political solution to the crisis in the country.

The warlord has been responsible for the military operations in Libya’s eastern region – especially Benghazi and Derna – wreaking havoc in the region and turning entire districts into ruin, thus forcing out families and killing hundreds of civilians and revolutionaries whom he describes as terrorists or Islamists.

Haftar has been very keen on building his self-styled army, regardless of the political process led by the UN and approved by the West, thus partnering with France and Russia to build his own military bases in eastern Libya, with the whole international community looking away!

The Head of the Russian contact group on intra-Libyan settlement, Lev Dengov,revealed last February that Haftar had asked Russia to build a military base in the country’s east, saying the Russian defense ministry received the details of the Libyan request.

Last October, The Sun unveiled that Russia was moving troops and missiles into Libya in a bid to enforce a new stranglehold on the West.

Intelligence chiefs, according to the report, told UK’s Prime Minister Theresa May that the Russian President Vladimir Putin “wants to make Libya his new Syria.”

Despite the Russian later denial of the report, the relationship Haftar has developed with Russia makes it very easy to any observers to understand that Moscow somehow is backing up the renegade general with some sort of military support, given his visits to Russia and meetings with defense officials.

As harsh as this reality is, the UN seems to care very little for the role of Haftar’s military passion for the future of Libya, as it keeps through its mission in Libya and its envoy Ghassan Salame involving Haftar as a significant party to the political process, while it knows very well that all he does is wage wars inside civilian districts with the help of foreign countries in a continuous violations of the UN laws and resolutions.

Palermo Conference on November 12-13 was a political venture by Italy in an attempt to redirect the elections and national reconciliation, however, Italy, the UN, and the rest of western countries were very keen for the last minute on having Haftar present with them, even for a few hours in front of the cameras, which makes every observer of the Libyan situation ask themselves, if the UN and the west are against a new military rule, why is Haftar important?

Why is Haftar involved in political conferences like Palermo and Paris before it or Rome and the like? Is he a political figure involved in the political process? No is the answer because he said tens of times that he doesn’t recognize the UN-backed government led by Fayez Al-Sirraj. He said it to the faces of Al-Sirraj, the UN envoy Salame, the western leaders and the Arab leaders, yet all of them keep involving him in the political process, looking away from his direct orders for massacres and war crimes.

For: UN and the West cherish a warlord in Libya