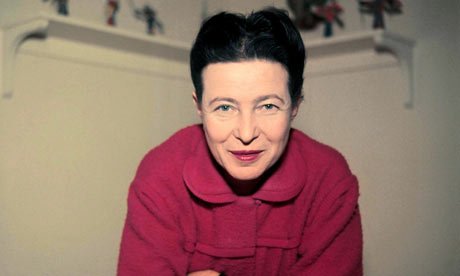 In Simone de Beauvoir’s 1945 novel The Blood of Others, the narrator, Jean Blomart, reports on his childhood friend Marcel’s reaction to the word “revolution”:

It was senseless to try to change anything in the world or in life; things were bad enough even if one did not meddle with them. Everything that her heart and her mind condemned she rabidly defended—my father, marriage, capitalism. Because the wrong lay not in the institutions, but in the depths of our being. We must huddle in a corner and make ourselves as small as possible. Better to accept everything than to make an abortive effort, doomed in advance to failure.

Marcel’s fearful fatalism represents everything De Beauvoir condemned in her writing, most notably her groundbreaking 1949 study, The Second Sex, often credited as the foundational text of second-wave feminism. De Beauvoir rejected the idea that women’s historical subjection was in any way natural—“in the depths of our being.” Instead, her analysis faulted the very institutions Marcel defends: patriarchy, marriage, capitalist exploitation.

In the 1975 interview above with French journalist Jean-Louis Servan-Schreiber—“Why I’m a Feminist”—De Beauvoir picks up the ideas of The Second Sex, which Servan-Schreiber calls as important an “ideological reference” for feminists as Marx’s Capital is for communists. He asks De Beauvior about one of her most quoted lines: “One is not born a woman, one becomes one.” Her reply shows how far in advance she was of post-modern anti-essentialism, and how much of a debt later feminist thinkers owe to her ideas:

Yes, that formula is the basis of all my theories…. Its meaning is very simple, that being a woman is not a natural fact. It’s the result of a certain history. There is no biological or psychological destiny that defines a woman as such…. Baby girls are manufactured to become women.”

Without denying the fact of biological difference, De Beauvoir debunks the notion that sex differences are sufficient to justify gender-based hierarchies of status and social power. Women’s second-class status, she argues, results from a long historical process; even if institutions no longer intentionally deprive women of power, they still intend to hold on to the power men have historically accrued.

Almost forty years after this interview—over sixty since The Second Sex—the debates De Beauvoir helped initiate rage on, with no sign of abating anytime soon. Although Servan-Schreiber calls feminism a “rising force” that promises “profound changes,” one wonders whether De Beauvoir, who died in 1986, would be dismayed by the plight of women in much of the world today. But then again, unlike her character Marcel, De Beauvoir was a fighter, not likely to “huddle in a corner” and give in. Servan-Schreiber states above that De Beauvoir “has always refused, until this year, to appear on TV,” but he is mistaken. In 1967, she appeared with her partner Jean-Paul Sartre on a French-Canadian program called Dossiers.

For: Simone de Beauvoir Explains “Why I’m a Feminist”