Millions of people across Indonesia and the Pacific have experienced a total solar eclipse, with parts of the region falling into complete darkness.

The eclipse began at 06:19 local time (23:19 GMT Tuesday) as the Moon started to pass directly in front of the Sun.

As the eclipse reached totality, the Moon blocked all direct sunlight, turning day into night.

In Indonesia’s Belitung province, a crowd gathered on a beach and witnesses spoke of a “magical” experience.

The eclipse was total in much of Indonesia and the Central Pacific, while parts of Australia and Asia experienced a partial one.

Astronomers reiterated advice not to look directly at the Sun with the naked eye, or through a telescope. Experts recommended using either a professional solar filter in front of a telescope or camera, or special eclipse-viewing glasses.

What was the eclipse like? Ging Ginanjar, BBC Indonesian

Belitung, Indonesia, was one of the best places to view the total solar eclipse.

From before dawn, about 200 people gathered at Olivier beach to watch. About 30 foreigners were in the crowd, travelling from Australia and Europe to see it.

One of them was Wilma from Holland, who is a solar eclipse hunter and has seen the solar eclipse five times. She said that when the eclipse started an overwhelming feeling of peace came over her and she heard no sounds. It was a magical experience she said.

When the solar eclipse started the crowd cheered and then went silent in awe. People were taking photos while others just watched in amazement. Then when it finished people clapped quietly. It was an incredible experience, our correspondent said.

Across the island other people prayed in mosques, churches and temples.

Who can see what in this eclipse?

Because the eclipse path crosses the International Date Line, in the local time zones it begins on Wednesday 9 March and ends on Tuesday 8 March.

People along a 150km-wide strip running through Sumatra, Borneo and Sulawesi – the path of eclipse totality – experienced the eclipse for about four hours on Wednesday morning.

Skywatchers in southern China, south-east Asia, Australia, Hawaii and Alaska experienced a partial eclipse when the Moon’s penumbra – the outer region of the shadow – catches them. This looks as if a chunk of the Sun has been blacked out.

For eclipse watchers outside these regions, a number of astronomy institutes hosted live streams of the event.

What are scientists looking for?

Scientists at Nasa said they planned to use the event to study solar physics.

From Indonesia, they will use an instrument called a polarization camera to capture 59 exposures of the Sun in just over three minutes, collecting data on the innermost parts of the sun’s volatile, superheated atmosphere.

This region can only be observed during total solar eclipses when the Sun’s bright face is completely blocked by the Moon. 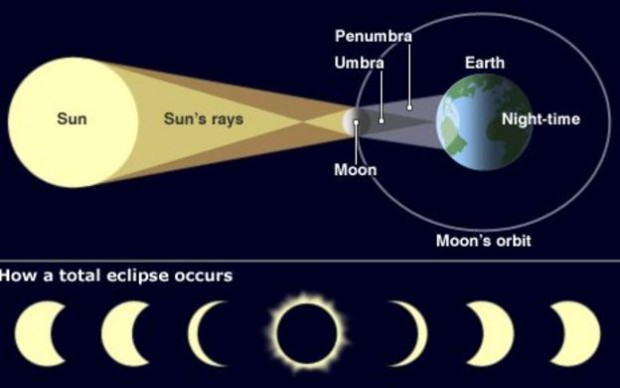 The lower part of the sun’s atmosphere, the corona, is thought to hold the keys to several solar mysteries, including the birth of explosive clouds of solar material called coronal mass ejections and the mystery of why the corona is actually hotter than the surface.

“The Sun’s atmosphere is where the interesting physics is,” said Nelson Reginald, from Nasa’s Goddard Space Flight Center in Maryland.

The most recent total solar eclipse took place in the far northern hemisphere on 20 March 2015.