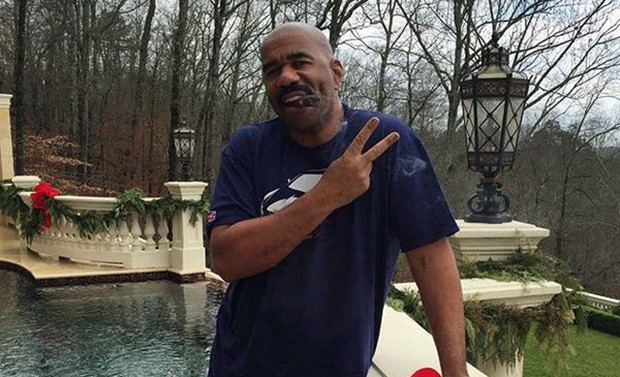 Steve Harvey had a laugh over his famous beauty pageant mix-up Friday when he wished everyone a Merry … Easter.

The tweet — accompanied by a picture of the comedian and talk show host with a cigar in his mouth and holding up the peace sign — came days after Harvey mistakenly announced that Miss Colombia had won Miss Universe during the nationally broadcast live pageant.

Pia Alonzo Wurztbach of the Philippines was the real winner, while Ariadna Gutierrez-Arévalo of Colombia was the first runner-up. The mistake made for an awkward few minutes of television, which naturally went viral immediately.

Harvey has apologized more than once, but in his first apology tweet, he misspelled both Colombia and Philippines. The combination of flubs led to an onslaught of criticism and jokes made at Harvey’s expense online, while others rushed to Harvey’s defense.

And the tweet wasn’t all wrong: Harvey’s emoji of choice was Christmas trees — so everyone can be sure he’s in on the joke.