Sudan and Italy agree on shared visions to support Libya 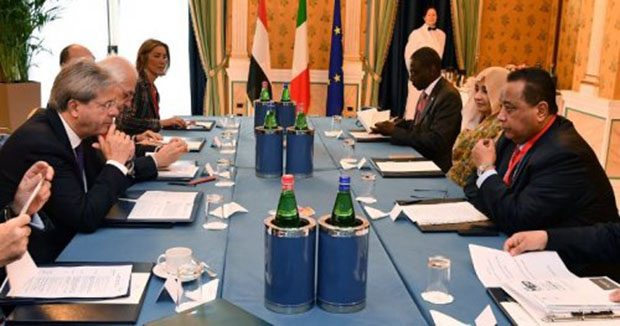 Sudanese Foreign Minister Ibrahim Ghandour and his Italian counterpart Paolo Gentiloni Friday discussed the situation in the regional situations and especially the Libyan crisis and Sudan’s efforts to control border with the North African country, according to the Sudan Tribune.

The meeting was held on the sidelines of the MED (Mediterranean Dialogues) forum, organised by the Italian foreign ministry with the participation of over 40 ministers from around the world to discuss security, terrorism, the Syrian and Libyan crises, illegal immigration, and energy, Sudan Tribune added.

Sudan Tribune went on to say that Ghandour further briefed Gentiloni “about Sudanese government efforts to control the border south of Libya and called for the support of the international community in this regard,” Khidir added.

For: Sudan and Italy agree on shared visions to support Libya