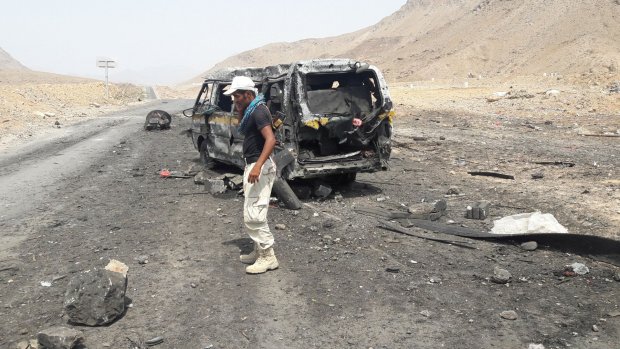 Two suicide bombers tried to ram vehicles laden with explosives through two Yemeni military checkpoints near the government-held port city of Mukalla on Monday, killing at least 10 people, the army and medics said.

Al-Qaeda’s Yemeni branch claimed responsibility for the attacks on the Gulf of Aden, the latest in a series of bombings since forces loyal to Yemeni president Abd-Rabbu Mansour Hadi, backed by troops from the United Arab Emirates, drove out the Islamist militants from the city in April.

“Forces at the checkpoints were able to . . . prevent them crossing the security barriers,” the army said. It said six soldiers had been killed and 18 wounded.

Medics said four civilians were also dead, and that 15 soldiers had been taken to hospital, five in serious condition.

Al-Qaeda in the Arabian Peninsula said in a report on the messaging service Telegram that dozens of Hadi troops were killed and wounded in the attacks, according to US monitoring group SITE.

It posted photos of two young men posing before its black and white banner, and identified the two bombers as Abu Tariq al-Sana’ani and Amir al-Sana’ani.

Islamist militants from al-Qaeda and its rival Islamic State have been building up their presence in the impoverished country, taking advantage of the chaos created by Yemen’s civil war, which began in 2014.

Al-Qaeda’s Yemeni branch had built up a mini-state centred on Mukalla. It has tried to bomb several Western airliners and claimed responsibility for an attack on the offices of the satirical magazine Charlie Hebdo in Paris last year.