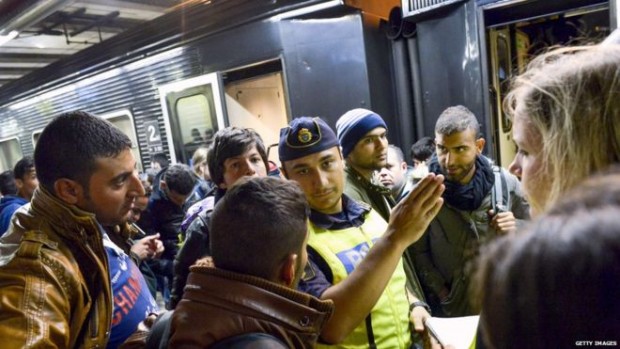 Sweden is to reject up to 80,000 people who applied for asylum in the country last year, as many as half of whom will be forced to leave against their will, according to official estimates.

The interior ministry has called on police and migration authorities to prepare for a sharp increase in deportations, and to arrange charter flights to expel refused asylum seekers to their country of origin. Sweden is also approaching other EU countries, including Germany, to discuss cooperation to increase efficiency and make sure flights are filled to capacity, it said.

On Thursday Finland’s interior minister said Helsinki also intended to expel about 20,000 of the 32,000 asylum seekers it received in 2015. “In principle we speak of about two-thirds, meaning approximately 65 percent of the 32,000 will get a negative decision (to their asylum application),” Paivi Nerg, the ministry’s administrative director, told Agence France-Presse.

Sweden received more than 160,000 asylum applications last year – by far the biggest influx in the EU as a proportion of the population. Between 60,000 and 80,000 of them will be rejected, the interior minister, Anders Ygeman, told Swedish media on Thursday.

The revelation that a large proportion of asylum seekers will be turned down, and as many as half of failed applications will be forcibly ejected, sends another signal to refugees that Sweden is no longer extending the warm welcome it offered to them just a few months ago.

“Of course it is a way of saying that if you come here and don’t have a case for asylum, then you won’t be able to stay,” said Victor Harju, spokesperson for Ygeman. “You can seek asylum in Europe but there are a lot of safe countries where you won’t be troubled by war and persecution, so you don’t necessarily have to end up in Sweden.”

Other Scandinavian countries are stepping up their attempts to broadcast to the war-torn regions of the world that they are no longer an attractive destination for refugees. Norway last week began deporting asylum seekers to Russia through the Arctic, while Denmark’s new law enabling police to confiscate cash and valuables from refugees has drawn sharp international criticism.

Sweden started to introduce border controls in November to stem the number of asylum seekers arriving there, which was running at 10,000 each week. In January it made it impossible for refugees to cross the bridge linking Sweden with Denmark unless they could show a passport or driving licence, since when the numbers are down to about 800 a week.

Last year Sweden turned down some 20,000 asylum applicants, or 45% of those who had previously arrived and made claims. About 3,000 were deported with a further 7,000 who were handed over to police disappearing from the immigration system and avoiding expulsion.

The remaining 10,000 people whose applications were rejected left the country of their own accord, the justice ministry said.

The overall approval rate may increase in 2016, the immigration ministry said, as the record 160,000 who put in asylum requests in 2015 included more citizens of Afghanistan and Syria, for whom it is easier to obtain refugee status than for other groups.

Syrians used to receive an automatic right to permanent residency, but this was removed late last year, to be replaced by temporary residence of up to three years. However, it does not affect the way asylum applications are treated, according to the ministry.

The backlog of asylum applications in the system means it will take up to two years for all the cases to be decided among 2015 applicants, the ministry said. The migration board is still dealing with applications from 2014, with the average processing time at more than eight months.

The border police said it was “vigorously expanding” its activities and aiming to double police numbers in the next few years to cope with the task of returning refused asylum seekers, and to deal with the “significant risk” of people going underground to escape deportation.

“What the government has done is acknowledge that the issue of returning nationals to their country of origin is going to be a big task because of the high numbers,” according to Jonatan Holst, a spokesperson for the immigration ministry.

Sanna Vestin, chair of FARR, the Swedish Network of Refugee Support Groups, said: “We are very concerned that in this situation the government will play down proper procedure and rights just to get rid of them. We have already had a suggestion to end the right to appeal – the courts uphold the appeals in around 10% of cases.”

She added: “It would be better if the government saw refugees as an investment in society’s future, rather than a burden. We have a very good economy, in part because of having many immigrants.”

For: Sweden to deport over 80.000 rejected asylum seekers