Syria: A woman Speaker of the People’s Assembly elected for the first time in history 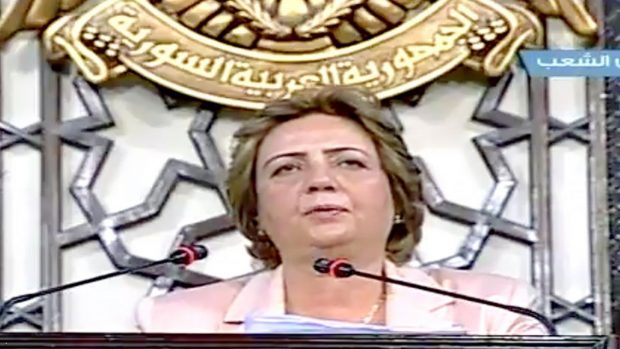 Hadiyeh Khalaf Abbas was elected as the Speaker of the People’s Assembly uncontested at the first ordinary round of the second legislative term held on Monday.

Abbas is the first woman to have held this position since 1919, when the first national parliament was formed- called the Syrian National Congress.

However in 2003, a woman was elected as the Secretary of the Assembly’s Office. Inaam Abbas represented the workers and farmers’ sector for Tartous province.

The 1953 Syrian constitution was the first to give the right of suffrage to women. The Syrian women were thus among the few women in the Arab countries to first be given the right to vote and run for legislative councils.

Hadiyeh Khalaf Abbas was born in 1958 in Deir Ezzor. She holds a PhD in Agricultural Engineering from Aleppo University. She held positions at the National Union of Syrian Students (Deir Ezzor-Raqqa branch) and she was a member of leadership of Deir Ezzor branch of al-Baath Arab Socialist Party (1988-1998).

Abbas was elected as a member of the People’s Assembly of the 8th legislative term (2003-2007) and has been a member of the Assembly’s National Reconciliation Committee representing Deir Ezzor.

For: Syria: A woman Speaker of the People’s Assembly elected for the first time in history