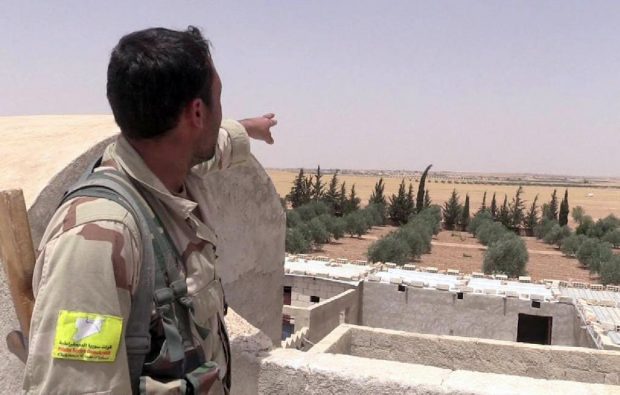 US-backed Syrian fighters have surrounded the Islamic State-held city of Manbij from three sides as they press a major new offensive against the jihadists near the Turkish border, a spokesman for the fighters said on Monday.

But in a sign of the difficulty world powers have faced in building a coalition to take on the self-declared caliphate, the slow pace of a separate assault by the Iraqi army on a militant bastion near Baghdad caused a rift between the Shi’ite-led government and powerful Iranian-backed Shi’ite militia.

The simultaneous assaults on Manbij in Syria and Falluja in Iraq, at opposite ends of Islamic State territory, are two of the biggest operations yet against Islamic State in what Washington says is the year it hopes to roll back the caliphate.

The Syria Democratic Forces (SDF), including a Kurdish militia and Arab allies that joined it last year, launched the Manbij attack last week to drive Islamic State from its last stretch of the Syrian-Turkish frontier. If successful it could cut the militants’ main access route to the outside world, paving the way for an assault on their Syrian capital Raqqa.

Last week Iraqi forces also rolled into the southern outskirts of Falluja, an insurgent stronghold 750 km down the Euphrates River from Manbij just an hour’s drive from Baghdad.

The SDF in Syria are backed by US air strikes and a small contingent of American special forces. The Iraqi army is also backed by US air power, as well as by powerful Iran-backed Shi’ite militia led by politicians who have emerged as rivals of Prime Minister Haider Abadi.

The assaults by Islamic State’s disparate enemies on a variety of fronts have put unprecedented pressure on the group, although its fighters have put up strong resistance so far.

The offensives have also put large numbers of civilians in fresh peril. The United Nations estimates 50,000 civilians are trapped in Iraq’s besieged Falluja, and more than 200,000 are at risk of being displaced by fighting around Syria’s Manbij.