The second convoy of aid lorries in a week has set off for the rebel-held Syrian town of Madaya, which is under siege from government forces.

About 50 trucks left the capital Damascus on Thursday, heading towards the town near the Lebanese border.

The UN has said it has received credible reports of people dying of starvation in Madaya, where about 40,000 people have been trapped.

On Monday the first aid was allowed into the town since October last year.

At the same time aid lorries also reached Foah and Kefraya, two northern towns besieged by rebel forces where the humanitarian situation is also said to be dire.

The latest delivery for Madaya is carrying flour, medicine and hygiene products for the town’s residents, reports say.

A UN official who visited the town during the last aid drop said conditions there were the worst he had seen during Syria’s five-year civil war.

People have reportedly been eating grass and pets to survive.

Madaya has been besieged since early July by government forces and their allies in Lebanon’s Shia Islamist Hezbollah movement.

Blockades have been a feature of Syria’s conflict. Up to 4.5 million people live in hard-to-reach areas, including nearly 400,000 people in 15 besieged locations who do not have access to life-saving aid. 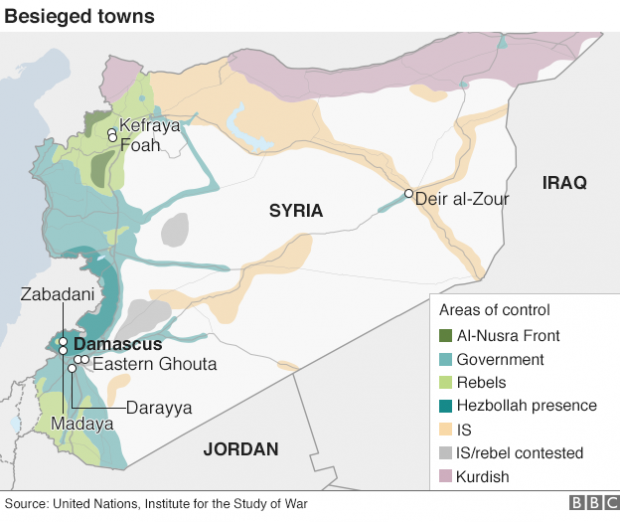 For: Syria: Madya due to receive second aids convoy