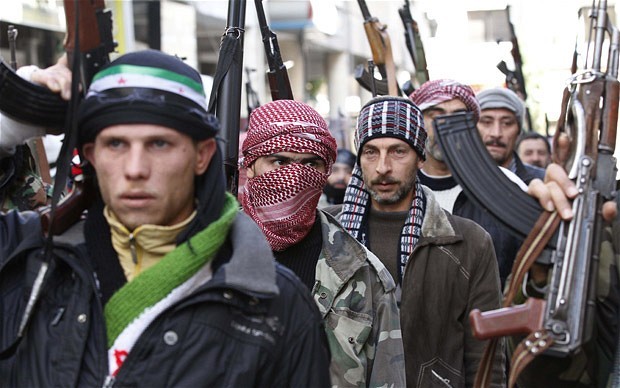 BEIRUT — A Syrian insurgent group whose commander was assassinated by an airstrike near the Syrian capital has appointed a successor, vowing to continue fighting both the Syrian government and the Islamic State group.

The Army of Islam said it has appointed Essam al-Buwaydhani, a field commander known as Abu Hammam, as the new leader of the group. He replaces Zahran Allouch, who was killed in the airstrike that targeted a meeting of rebel commanders in a Damascus suburb.

In a video posted on the Internet late Thursday, a spokesman for the Army of Islam said Allouch’s killing “will only increase our fight” against the government of President Bashar Assad and the Islamic State group.

“We are moving forth on the path, and we do not change or alter,” the unidentified speaker said, reading from a statement.

Allouch’s death a month before peace talks are scheduled to begin between the Syrian government and opposition rebel groups is a blow to insurgents fighting to topple President Bashar Assad and a boost to government forces who have been bolstered by the Russian military intervention in Syria in the past few months. Syrian government forces have been on the offensive in several parts of the country since Russia began its military campaign in late September to shore up Assad’s forces.

The Army of Islam took part earlier this month in an opposition meeting held in Saudi Arabia to agree on an opposition delegation that would negotiate with government representatives in peace talks planned for late January in Geneva. The Syrian government has always said it will not negotiate with terrorists and considers the Army of Islam to be terrorists.

Allouch, who was in his mid-40s, was widely known to be supported by Saudi Arabia and Turkey. He was one of the most powerful rebel commanders with thousands of fighters controlling large parts of the eastern Damascus suburbs of Eastern Ghouta and Douma. In addition to fighting government forces, the Army of Islam faction fought pitched battles against its rival, the Islamic State group near Damascus.

A former prisoner who was released in a general amnesty after the uprising against Assad began in March 2011, Allouch joined the armed opposition and formed the Army of Islam — which became one of the most organized rebel factions in Syria.

Critics accused him of sectarian politics and brutal tactics similar to that of the Islamic State group.

He is blamed by other opposition groups for the December 2013 kidnapping of four prominent activists including human rights activist and lawyer Razan Zaytouni. He denies holding them although they were kidnapped from an area under Army of Islam control.

The Syrian government claimed responsibility for killing Allouch in the airstrike on a meeting of rebel commanders near the Damascus suburb of Otaya.

It said that the strike was carried out after a series of aerial reconnaissance operations against groupings of “terrorist” organizations and their headquarters in the rebel-held Damascus suburb of Eastern Ghouta. In addition to Allouch, it said the airstrike killed “a large number of commanders of Ahrar al-Sham and Faylaq al-Rahman,” other rebel factions who are often allied with the Army of Islam.