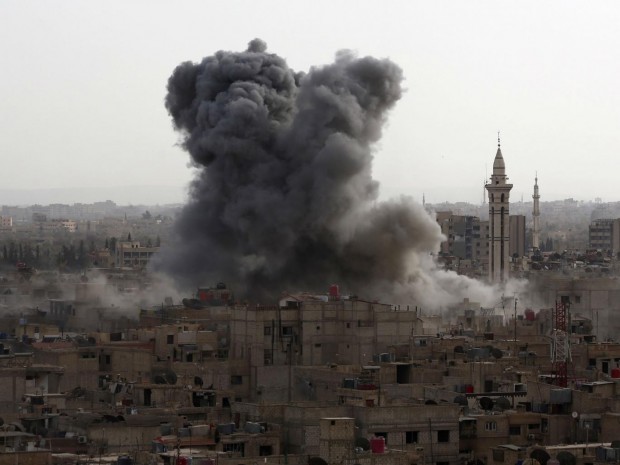 At least 30 people have been killed and scores wounded when two suicide bombers blew themselves up in the Sayeda Zeinab district of Damascus, where Syria’s holiest Shia shrine is located, the interior ministry said.

State television showed footage of burning buildings and wrecked cars in the neighbourhood on Sunday. It gave no further details. The heavily populated area in the south of the city is a site of pilgrimage for Shias from Iran, Lebanon and other parts of the Muslim world.

The explosions occurred as representatives of Syria’s government and its divided opposition began convening in Geneva for the first UN-mediated peace talks in two years.

The UN has said the aim would be six months of talks, first seeking a ceasefire and later working toward a political settlement to a war that has killed more than 250,000 people, driven more than 10 million from their homes and drawn in global powers.

But the process looked highly uncertain on Sunday, with the main opposition group threatening to walk away before planned peace talks even begin in earnest.

The Sayeda Zeinab shrine area witnessed heavy clashes in the first few years of the conflict, which began in 2011, but has since been secured by the Syrian army and Shia militias led by Hezbollah, which has set up protective roadblocks around it.

The shrine houses the grave of the daughter of Ali ibn Abi Talib, the cousin of the prophet Muhammad whom Shia Muslims consider the rightful successor to the prophet. The dispute over the succession led to the major Sunni-Shia schism in Islam.

Many Iraqi and Iranian Shia militia groups who volunteer to fight Sunni Islamist radicals in Syria in a conflict that has heavy sectarian overtones say they are coming to Syria to defend the shrine.