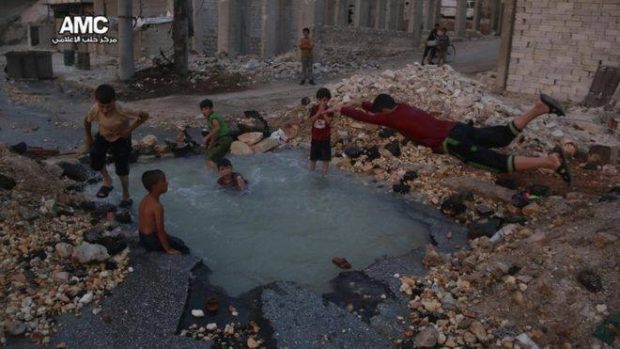 Syrian activists have published photos showing boys swimming in a water-filled crater in the divided city of Aleppo.

The pro-opposition Aleppo Media Centre said the crater was in the Sheikh Saeed area and was the result of an attack by President Bashar al-Assad’s forces.

“Whatever Assad has done in Aleppo, life is not over, its children make a new life in every site destroyed by his rockets,” reads the caption.

Some two million people are trapped by the fighting in and around Aleppo.

The UN has called for a 48-hour “humanitarian pause” to allow the safe delivery of food and medicine to the rebel-held east and government-controlled west.

It also wants to carry out repairs to the city’s war-ravaged electricity and water systems, amid late summer temperatures in excess of 35C (95F).

Officials from the US and Russia, which back opposing sides in the five-year civil war, were expected to meet this week to discuss how to bring about the pause.

For: Syrian boys create entertainment out of war aftermath