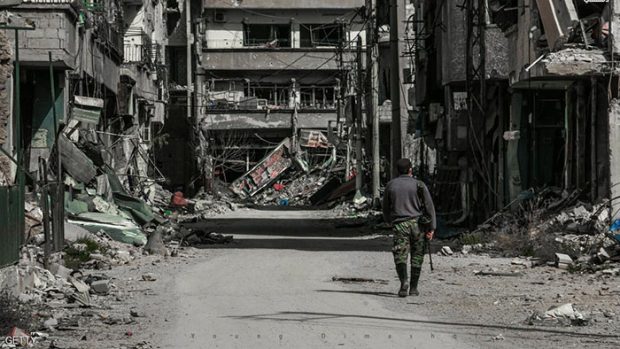 Opposition fighters in Syria advanced towards the besieged city of Daraya on Monday, opening a key supply route into the area.

Fierce battles raged in the area just south of Damascus on Sunday, with rebel sources telling Al-Jazeera that seven opposition fighters were killed during clashes with pro-government troops.

Abu Malik al-Shami, spokesperson for local opposition group Martyrs of Islam, told Baladi News that his group had launched a suicide attack at a checkpoint run by pro-government forces on the road between Daraya and nearby suburb Muadhamiya on Sunday, taking 12 soldiers hostage following the blast.

The attack left opposition fighters in control of a road linking Daraya with Muadhamiya, a small town five kilometres to the west.

Following the advance, the local council of Daraya reported a campaign of air strikes on the town, saying on Facebook that government planes had dropped 30 barrel bombs in the area since midnight on Sunday.

Daraya, which had a pre-war population of around 80,000 and one of the first towns to erupt in protest against President Bashar al-Assad in 2011, has been under a government-imposed siege since 2012.

Nine out of 10 residents have fled since then, and those who remain report dire conditions.

Earlier this month a convoy of trucks arrived in Daraya, carrying the first food aid the town had received since the siege began.

In April a group of 47 women from the town sent an open letter warning that they were on the verge of seeing their children starve to death if aid did not reach them soon.