Syrian opposition “ready” to mqke these peace talks a success 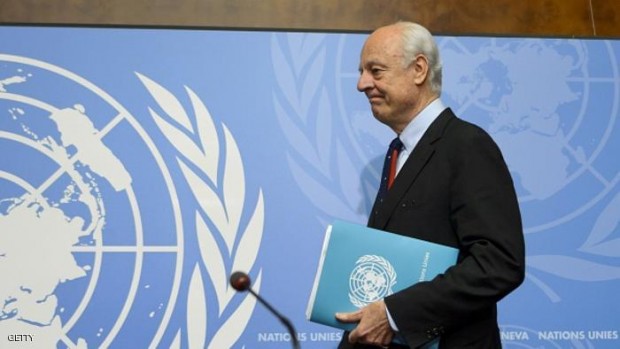 Dueling sides of Syria’s gruesome civil war are meeting in Geneva in hopes of ending the bloodshed. But they’re not meeting with one another.

Instead, a U.N. special envoy is trying to find common ground between the parties before thousands more people are killed.

De Mistura has met with representatives of the Syrian regime, but said that two-hour meeting was mainly preparatory — and that any substantive talks would have to wait until the opposition group arrives.

But the odds are formidable. Two prior rounds of peace talks have yielded no lasting ceasefire. Two prior U.N. special envoys trying to forge peace in Syria have come and gone. And all the while, the civil war that has claimed more than 300,000 lives rages on.

What the resolution says

De Mistura is trying to get everyone on board with a U.N. Security Council resolution adopted last month. According to the resolution, the UNSC calls for:

But the crisis won’t be easy to solve. Syrian President Bashar al-Assad has offered no indication he will step aside. And opposition members continue demanding an end of 44 years of Assad family rule.

The current talks are the first time in two years that the warring sides in Syria are meeting in an effort to end the crisis there. The goal is a nationwide ceasefire agreement among all factions other than ISIS and the al Qaeda-affiliated al Nusra Front.

This round of peace talks began Friday after a series of delays. They were initially set to begin last Monday, but were held up because of ongoing discussions about who should represent the opposition, de Mistura said.

The U.N. special envoy has said his mandate is to involve “the broadest possible spectrum of the opposition.”

Opposition members have listed their own demands for the regime. They say they want an end to aerial bombardments; humanitarian access to beleaguered areas; and the release of prisoners, particularly women and children.

As warring parties try to work toward an agreement, many Syrian civilians are on the brink of starvation.

St least 16 people have died of starvation in the city of Madaya in the past few weeks, said the aid group Medecins Sans Frontieres, also known as Doctors Without Borders. Those deaths came even after the city received three rare aid convoys of food and medical supplies.

In addition to the starvation deaths, there are 320 cases of malnutrition, the group said.

“It is totally unacceptable that people continue to die from starvation, and that critical medical cases remain in the town when they should have been evacuated weeks ago,” MSF Director of Operations Brice de le Vingne said.

Madaya is a rebel-held city that has been choked off by government blockades and landmines.

For: Syrian opposition “ready” to mqke these peace talks a success