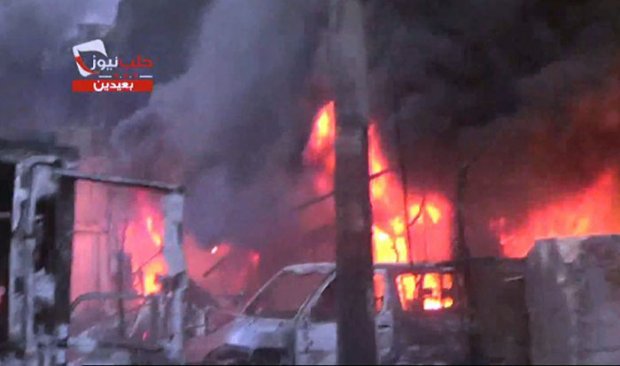 Rebel factions who claim to have made gains in Syria’s city of Aleppo have come under intense air bombardment from pro-government forces.

The Syrian government released video showing its planes apparently bombing targets in the south-west of the city. The rebels earlier said they had broken a weeks-long government siege of Aleppo – a claim denied by Damascus. Some 250,000 people reportedly live in the besieged areas.

The bombers, which flew from Russia, killed many IS militants and destroyed some command posts and heavy weapons, the ministry said on its Facebook page.

Opposition activists said Russian aircraft also took part in the air strikes on Sunday in Aleppo’s Ramouseh area. There was no immediate comment from the Russian military. Air strikes on Aleppo are reported to be continuing on Monday.

Meanwhile, the rebel coalition said it would double the number of fighters to launch a new offensive and retake the whole city.

“We will not rest until we raise the flag of the conquest over Aleppo’s citadel,” the coalition was quoted as saying.

The Syrian government denies the rebels have made any significant breakthrough, and says the siege remains in place.