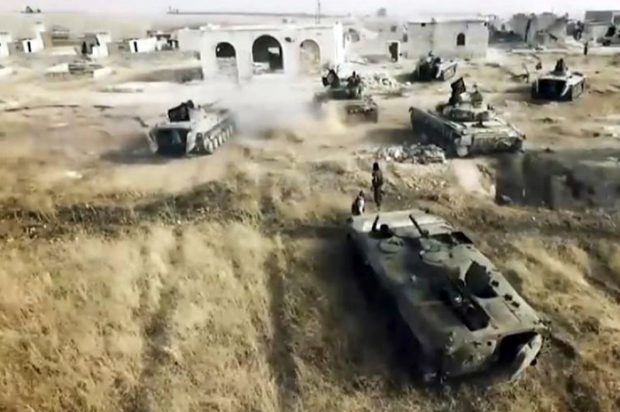 Russian-backed Syrian troops have reportedly advanced into Raqqa province after defeating Islamic State militants in a fierce battle on Friday. The offensive coincides with Kurdish and rebel forces pressing terrorists in Syria and Iraq’s move on Fallujah.

Troops loyal to President Bashar Assad have been rapidly advancing on Islamic State’s (IS, formerly ISIS/ISIL) Syrian stronghold of Raqqa, claiming a victory over IS fighters at the Zakiyah Crossroad, the strategic area at the border between Hama and Raqqa provinces, Al-Masdar News reported from the ground. Syrian forces reportedly managed to recapture over 35km (21.7 miles) of land en route to Raqqa within two days.

According to al-Akhbar newspaper, the imminent goal of the Syrian Army offensive, which is supported by Russia from the air, is to reach the town of Tabqa, which lies just 50km from Raqqa. Tabqa was seized by IS in August 2014, forcing Syrian troops out of Raqqa province.

Earlier on Thursday, the Syrian Army announced it would launch an offensive either in the direction of Deir ez-Zor or Raqqa, without specifying the details of the operation, Reuters reported.