Syrian revolutionaries vow to keep the fight on

Rebel groups in Syria have told the BBC they will not stop fighting because they do not believe that Russia will end its bombing campaign in support of the government.

They have expressed scepticism over a deal by world powers to push for a cessation of hostilities within a week.

They have also reiterated their demand that President Bashar al-Assad be removed from power.

Earlier the president said he wanted to retake “the whole country” from rebels.

Three Syrian rebel groups have expressed doubts to the BBC over the cessation of hostilities agreement:

Riad Hijab, co-ordinator of Syria’s main opposition bloc, earlier told the BBC’s Newsnight programme that to announce a cessation of hostilities before making progress in the political process “is not realistic, objective or logical”.

Agreement to try to bring about a cessation of hostilities and allow more access for humanitarian aid was reached by world powers late on Thursday in Germany, but neither the Syrian government nor the rebels were involved.

So far there has been no sign of the UN realising its hopes of delivering aid imminently to more besieged areas.

A new UN task force set up to co-ordinate aid distributions convened in Geneva on Friday.

Some Syrian cities have been cut off from aid for more than a year because of fighting. About 13.5 million people are in need, the UN says.

In his rare interview recorded on Thursday, Mr Assad told AFP news agency that defeating the groups ranged against him could take some time due to the involvement of regional powers.

Mr Assad expressed support for peace talks but said negotiations did not mean “we stop fighting terrorism”. And he vowed to sever the rebels’ supply route from Turkey.

Syrian government forces, backed by Russian air strikes, have almost encircled rebels in parts of the northern city of Aleppo.

US state department spokesman Mark Toner said Mr Assad was “deluded” if he thought there was a military solution to the conflict.

More than 250,000 people have been killed and some 11 million displaced in almost five years of fighting in Syria. 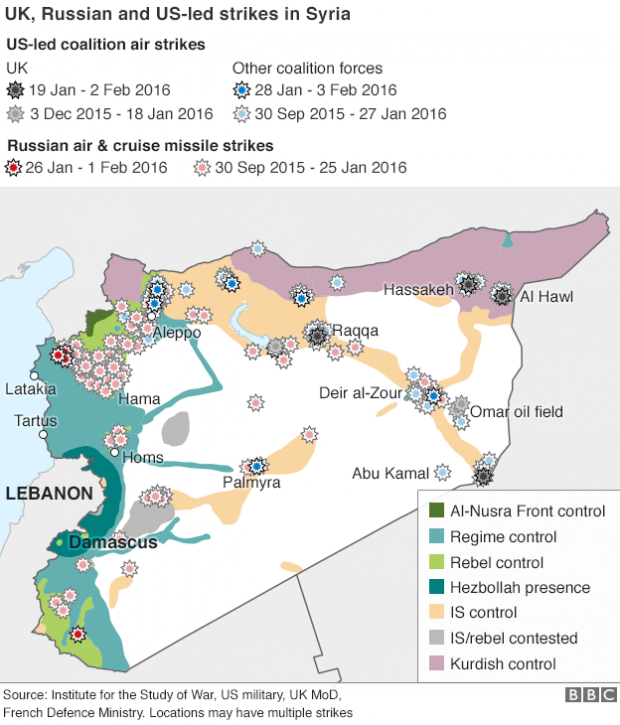 Why is there a war in Syria?

Anti-government protests developed into a civil war that, four years on, has ground to a stalemate, with the Assad government, Islamic State, an array of Syrian rebels and Kurdish fighters all holding territory.

Who is fighting whom?

Government forces concentrated in Damascus and the centre and west of Syria are fighting the jihadists of Islamic State and al-Nusra Front, as well as less numerous so-called “moderate” rebel groups, who are strongest in the north and east. These groups are also battling each other.

How has the world reacted?

Iran, Russia and Lebanon’s Hezbollah movement are propping up the Alawite-led Assad government, while Turkey, Saudi Arabia and Qatar back the more moderate Sunni-dominated opposition, along with the US, UK and France. Hezbollah and Iran are believed to have troops and officers on the ground, while a Western-led coalition and Russia are carrying out air strikes.

For: Syrian revolutionaries vow to keep the fight on