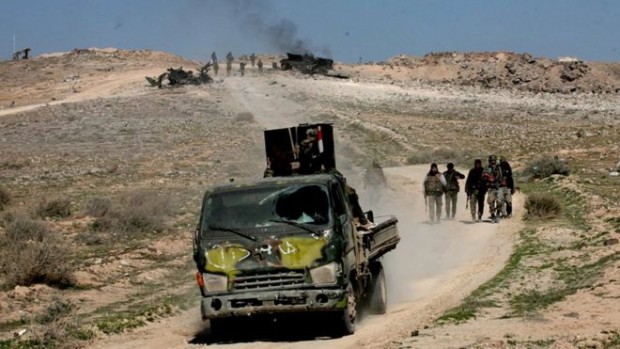 US Secretary of State John Kerry says all alleged violations of the partial truce in Syria will be investigated.

He said the US and Russia were working on a mechanism to ensure air strikes only targeted so-called Islamic State (IS) or al-Qaeda-linked al-Nusra Front.

Mr Kerry said they had agreed not to debate alleged violations in public.

On Monday, aid convoys began reaching besieged areas of Syria as the cessation of violence, which began on Saturday, appeared to be holding.

But France expressed concern about reports of strikes by Syrian government and Russian aircraft on areas controlled by mainstream rebels.

Russia says it is only targeting UN-designated terrorist organisations – including IS and al-Nusra, which is part of a major rebel alliance – in line with the terms of the cessation of hostilities.

Mr Kerry, speaking in Washington alongside German Foreign Minister Frank-Walter Steinmeier, said teams in Geneva and the Jordanian capital Amman would look into all reports of violations.

“We are going to track down each alleged violation and work even more now to put in place a construct which will help us to guarantee that [military] missions are indeed missions against al-Nusra or missions against [IS],” he said.

Mr Kerry added that he and Russian Foreign Minister Sergei Lavrov had agreed not to “litigate… in a public fashion” reports of violations on both sides.

He said that the goal should be making sure that the cessation, brokered by the US and Russia, would stick, not finding ways to undermine it.

Mr Kerry added that although both sides may have violated the truce, no breaches had been significant enough to shatter it.

UN Secretary General Ban Ki-moon earlier told reporters in Geneva that “by and large the cessation of hostilities is holding, even though we have experienced some incidents”.

The UN and its partners have been stepping up deliveries of food, water and medicine, and plan to reach more than 150,000 people over the next five days.

They hope to help 1.7 million in hard-to-reach areas by the end of March.

A spokesman said a further 21 truckloads were also due to arrive.

The UN and other groups plan to deliver aid to the rebel-held towns of Madaya and Zabadani, in the mountains north-west of Damascus, and the government-controlled towns of Foah and Kefraya, in the northern province of Idlib on Wednesday.

They are also expected to attempt another air-drop over the eastern city of Deir al-Zour, where 200,000 people in government-held areas are under siege by IS.

The UN says more than 450,000 Syrians are trapped in 15 besieged towns and villages, while 4.1 million others are living in hard-to-reach areas.

Why is there a war in Syria?

Anti-government protests developed into a civil war that, four years on, has ground to a stalemate, with the Assad government, Islamic State, an array of Syrian rebels and Kurdish fighters all holding territory.

More than 250,000 Syrians have been killed and a million injured. Some 11 million others have been forced from their homes, of whom four million have fled abroad – including growing numbers who are making the dangerous journey to Europe.

How has the world reacted?

Iran, Russia and Lebanon’s Hezbollah movement are supporting the Alawite-led Assad government, while Turkey, Saudi Arabia and Qatar back the more moderate Sunni-dominated opposition, along with the US, UK and France. Hezbollah and Iran have pro-Assad forces on the ground, while Russia and a Western-led coalition are carrying out air strikes.

For: Syrian truce violations to be investigated, US State Secretary, John Kerry says