Thai authorities warn nationals of being lured to work in Libya 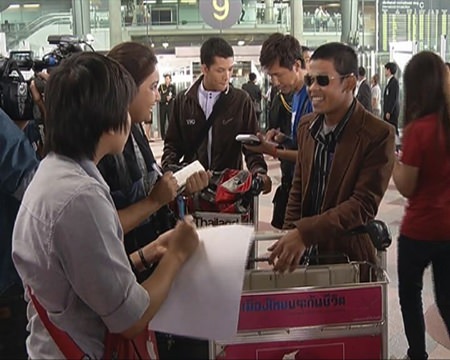 Thai Employment Department director-general Singhadet Chu-amnat said on Sunday that the Labour Ministry had issued a warning to job seekers not to travel to Libya during this time because the country was plagued with violent incidents from a civil war.

He said people acting as illegal job placement agents are in violation of the Employment and Labour Protection Act of 1975 and liable to three to 10 years imprisonment or a fine of between 60,000 and 200,000 baht.

Many Thai workers are ignoring a Labour Ministry warning about travelling to Libya and are taking up offers from people who claim to be job placement agents, added Singhadet.

Mr Amnat said the Employment Department was recently told by Thailand’s labour office in Riyadh that it had received complaints from six Thai workers who had been lured to Libya. The workers asked the Labour Department to help them get back to Thailand.

The six workers said they were persuaded by job agents to travel to Libya on a tourist visa without going through the Labour Ministry’s worker screening checkpoint. The workers each paid 80,000 baht to the agents and were promised they would get a job in one month, after which the workers would then be paid back 30,000 baht.

However, after arriving in Libya, they were confined to a small room without jobs and with little food.

Mr Singhadet said the department had been informed that about 20 more job seekers from Khon Kaen, Nakhon Phanom and nearby provinces were preparing to travel to Libya in a similar manner.

For: Thai authorities warn nationals of being lured to work in Libya