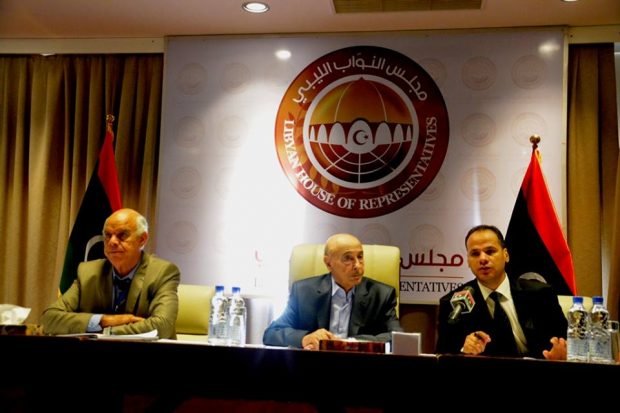 Dignity Operation affiliate and Al-Thinni government’s chief of staff, Brigadier General Abdel-Razek al-Nadhouri, threatened Tuesday to target foreign oil tankers if they entered territorial waters, after a controversial deal was reached between the United Nations envoy and the commander in control of the oil terminals and head of Petroleum Facilities Guard (PFG) Ibrahim Jodran.

The agreement between UN envoy to Libya, Martin Kobler, and Ibrahim Jedran has been widely criticised amid accusations that it empowers the warlord who is viewed by many as having held Libya’s oil hostage for the past three years., especially that it includes paying him over 250 million dinars, according to sources.

Brigadier General Abdel-Razek al-Nadhouri warned foreign companies against signing oil deals with any party except for the “state-run National Oil Corporation (NOC) branch in Benghazi”, according to his statement.

“Any movement of any vessels or oil tankers toward the Libyan territorial waters without prior agreement with the NOC affiliated to the Libyan Tobruk parliament, will be targeted,” the statement read.

Libya’s oil corporation — like the rest of the oil-rich North African country’s state bodies— has been split between eastern and western branches, however; the international community only recognizes the Tripoli-based one, which falls under the Tripoli-based UN-brokered Government of National Accord (GNA).

Al-Nadhouri made his threat days after Kobler and Jodran made their deal. Many from both sides believe that the deal — the terms of which haven’t been publicly laid out — empowers PFG commander and undermines the GNA.

The spokesman for the parallel NOC in Benghazi, Mohamed al-Munifi, said that both branches of the NOC oppose the deal with Jodran, because it, “sets a precedent for other militias to take a similar approach by holding the Libyan people’s income hostage.”

In a letter to the UN and the GNA, the head of NOC in Tripoli, Mustafa Sunallah, expressed strong opposition to the deal and described Jodran as a “criminal.”

“He has an entirely malevolent influence, with no concept of a national interest. His only motive is what is good for Jodran,” he wrote, adding, “My only conclusion is that you are either ignorant of the consequences of what you are doing, or you have set an almost unbelievably low standard for your achievements in Libya.”

Jodran responded with a brief statement obtained by The Associated Press, saying, “The letter is not worth the ink written with.”