Trump rushed off stage at his rally in Nevada 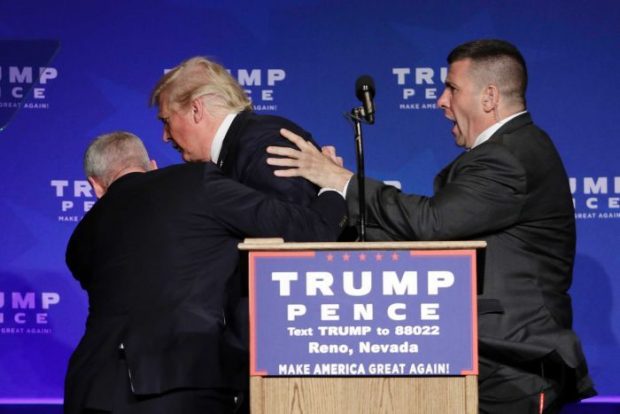 Republican candidate Donald Trump was briefly rushed off the stage by Secret Service agents at a rally in Reno, Nevada, in a false alarm, the BBC reported.

A man holding a sign saying Republicans Against Trump was tackled by security agents, after shouts that he had a gun, it added.

The Republican candidate says he is going to target states seen as Democratic strongholds ahead of Tuesday’s election.

He is set to visit Pennsylvania, Michigan and also Minnesota, which has not voted Republican since 1972, according to the BBC.

Both candidates have been making late changes to their travel schedules as falling poll numbers for Mrs Clinton in some key Democratic-leaning states present what the Trump campaign sees as new opportunities.

Hillary Clinton remains ahead in most national polls, the BBC stated.

For: Trump rushed off stage at his rally in Nevada