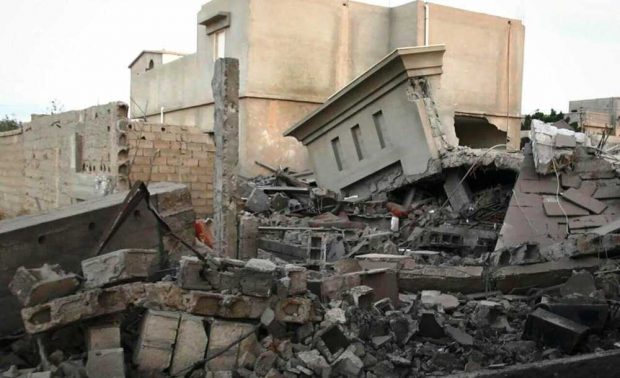 After nearly three years of fierce clashes between the forces of Operation Dignity led by Khalifa Haftar and the fighters of Benghazi Revolutionaries Shura Council in Benghazi in general and Ganfouda area in particular, the former said his forces have captured the district, without giving details about the fate of neither the civilians nor the fighters who were inside.

The spokesman of the Operation Dignity, Ahmed Al-Mismari, said on pro-Haftar media outlets on Wednesday that their forces fully controlled Ganfouda.

However, the media wing of the Benghazi Revolutionaries Shura Council (BRSC) Saraya Media Center, said the news is false and they are still inside the district trying to save the civilians from the monstrous and atrocious attacks of Haftar-commanded forces.

Ganfouda has been besieged for many months by the forces of Operation Dignity, many civilians from Libya and Arab countries are trapped there with dire living conditions. They have urged the local and international communities to step in and have a say in the inhumane blockade they are forced into, however, despite calls by the USNMIL and other organisations, Haftar’s forces continued the siege.

Khalifa Haftar started off in May 2014 and announced his Operation Dignity in Benghazi in what he said a war on terrorism in the city.

His forces have been fighting in Benghazi and on its outskirts as well as in eastern parts like Derna for over 32 months now, killing a huge number of civilians, displacing thousands from their houses in Benghazi and destroying most of the city’s infrastructure, turning it to what analysts said “another Aleppo.”

Over the last period many secrets have been uncovered by both Arab and foreign media and newspapers about the military support that Haftar’s forces are receiving from regional and western powers.

According to many reports published this year and last year, UAE, Jordan, Egypt, France, and to some extent, the US and lately Russia are supporting Haftar in his military campaign in eastern Libya by providing him with logistic and military as well as aerial backup.

According to pro-BRSC reports, Haftar has used Emirati, French and Egyptian warplanes and pilots as well as expertise in most of his forces’ airstrikes on Ganfouda and other parts in Benghazi like Al-Sabri, Sooq Al-Hoot, and Chinese Buildings as well as other parts where the BRSC fighters and civilians are located.

Lately, Haftar has reportedly signed a deal with Russia onboard an aircraft carrier, the Admiral Kuznetsov, off Libya’s eastern coast, where the deal of arms in exchange of Russian influence and possible military bases in eastern Libya took shape.

According to a report by the Middle East Eye (MEE) on Wednesday, Russia and Haftar agreed to transfer weapons from Algeria to eastern Libya as part of showing that Russia is still committed to the UN embargo on selling arms to Libya.

“Haftar could have turned to his allies, Egypt and the United Arab Emirates, but most of their weapons are American, so the natural solution was Algeria, which gets 90 percent of its arms from Russia.” the MEE’s report says.

Until today, Haftar remains a staunch objector to the UN-backed Government of National Accord. He has many times denounced it and its style of work in the capital. He has rendered it as “governed by Muslim Brotherhood.” and other many things not in its favour.

Haftar also strongly pushed the House of Representatives in Tobruk to not approve the GNA so that it remains void of any legitimacy, according to pro-Haftar media and followers.

Despite all of this back and forth hubbub, there is a meeting in the coming days that will probably include Haftar and the head of the GNA’s Presidential Council, Fayez Al-Serraj, in Cairo, Egypt, as part of a tripartite initiative advocated by Egypt, Algeria and Tunisia.

The question remains, is Libya going to move forward with Haftar and his forces trying to bring back the old school military rule in Libya in the name of fighting terror and restoring stability? Or is it going to keep on resisting him and his forces and pay the price?