Tunisian FM warns against the spread of extremist groups in Libya 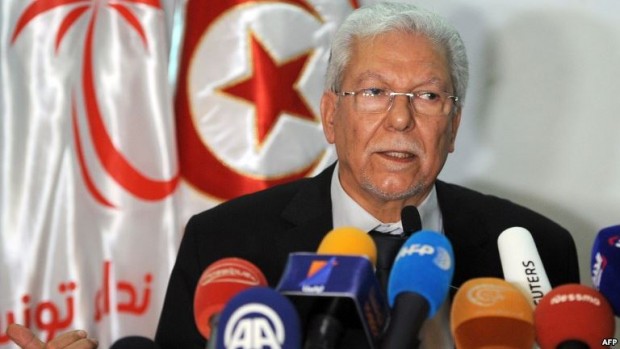 Tunisia has been recently engaged in meetings over the Libyan crisis, having hosted meetings in preparation for the UN-sponsored Skhirat agreement announced on 17 December, which stipulated the formation of a national unity government in Libya .

The event was attended by the UN envoy for Libya Martin Kobler, as well as head of the new unity government Fayez Al-Sarraj.

In an interview with Ahram Online, Tunisia’s Foreign Minister Al-Tayyeb Al-Bakkoush discussed Libya’s current political conditions, as his country became an influential actor on a number of issues related to the divided country.

El-Bakkoush is also a well-known figure in Cairo due to his work in the past with civil society organisations and rights activists. He used to visit Egypt during the 1990s as the then head of the Arab Institute for Human Rights.

AO: Based on your experience in the preparatory meetings of the Skhirat agreement, what — in comparison to earlier agreements — is politically new about this deal?

TB: What is new this time is that majority of the signatories to this deal became convinced of the urgency and necessity of reaching a political solution more than ever. One reason is that disagreements and expanding the time span of the conflict do not serve the interests of the Libyan people. Another reason is that the international actors involved are now convinced that an agreement over Libya is necessary, especially that keeping the conflict unresolved has led to the spread of terrorism in the region and the whole world.

AO: What are the chances for Al-Sarraj’s “unity government” to impose its control over Libya? Also, how will it deal with the militias fighting each other in Tripoli?

TB: This government is temporary, and will stay for one year. It includes nine ministers, but it can expand and include more ministers. Supporting this government to maintain security on the Libyan territories and implement a finalised roadmap is important now. The government should not be in exile, but rather in Libya and Tripoli. There is no doubt that the sponsorship of the agreement by the United Nations (UN) will help in solving the state of lawlessness in Libya.

AO: But how will the issue of militias be dealt with?

TB: Militias represent a phenomenon that is not consistent with political activities or political settlements, and it should be neutralised. This can happen by either disarming the militias or integrating them in the military-security establishments. Some of these militias committed crimes that can be described as terrorist acts such as kidnapping and extortion. These crimes make them subject to judicial accountability in Libya, neighbouring states or before the International Criminal Court (ICC). In order to avoid hindering the political path by such groups, I believe we can impose military and security pressures on such groups to neutralise them.

AO: Some Libyans argue that it is important to prioritise lifting the international arms embargo imposed on the Libyan army ahead of signing any political agreement. What do you think?

TB: With all due respect to such a standpoint, the matter requires the presence of a strong authority in advance to deal with. A divided authority cannot be strong, it has to gain legitimacy. The currently existing governments in Libya cannot accomplish this aim, and they would have made it if they could.

AO: In your view, what is the fate of general Khalifa Haftar? He didn’t back the Skhirat agreement, yet asserted he will not hinder its implementation.

TB: I don’t personally contact general Haftar, and I don’t remember a visit by him to Tunisia this year. I cannot judge him since this is a Libyan domestic affair, but I consider his position —   on not opposing the agreement — a positive one.

AO: Some voices in Libya describe Al-Sarraj’s government as “a government with an international mandate” that paves the way for a western military intervention in Libya. What is your view on that matter?

TB: The issue is not that easy. The solution came under a UN framework and umbrella, and enjoyed the backing of the international organisation. Concerning a military intervention, it is not necessarily possible. What makes it possible is the existence of a number of conditions. There is no need for intervention unless it is aiming to combat terrorism in Libya, such as the arrival of thousands of ISIS militants to its territories. It should also be preceded by the approval of the Libyan people and neighbouring states, not through a foreign decision.

AO: Was the approval of Tunisia on such a military intervention sought?

TB: We expressed rejection for any military intervention in Libya that lacks the conditions I have just mentioned. The intervention is just a possibility, and it should not seek to support some Libyan groups against others.

AO: Do you think a military intervention is about to occur?

TB: I don’t think so, unless the terrorist groups became a threat to a political settlement in Libya.

TB: Let’s not get carried away. We will examine the situation when the conditions for intervention are in place.

AO: According to the information you have, to what extent does ISIS pose a threat in Libya?

TB: In the meantime, they managed to take control of an important area inside Libya. The threat is real and it cannot be underestimated. If a political solution is not accelerated in Libya, the threat of terrorism will expand in not only Libya, but also in all of Africa, and they will become connected to other groups in Nigeria, Somalia and others.

TB: ISIS is getting closer to oil wells, and some wells are now under its control in the “Oil Crescent” that is close to the sea. The process of integration between terrorism and smuggling activities is clear. There is no doubt that the smuggling of humans, goods and oil finances terrorism.

AO: Is ISIS selling oil to a specific entity?

TB: Official entities do not appear, but the process takes place through intermediaries acting in a way close to that of mafias.

AO: Do you think that foreign intelligence agencies are behind the latest terrorist attacks that hit Tunisia?

TB: This is hard to assess, and we cannot give judgments based on intentions, and there is no conclusive evidence or information on that.

AO: Tunisia President Beji Ceid Essebsi announced recently the joining of an anti-terrorism coalition that was declared by Saudi Arabia. There are fears and criticisms about the presence of Tunisia in a Sunni coalition. What is your view on this issue?

TB: Is ISIS a Shia group? Tunisia refuses to be involved in an ethnically, religiously or ideologically based alliance. We stand against terrorism regardless of such considerations. The involvement of Tunisia in the war on terror comes on regional and international levels, and is based on integration not discrepancies. Before anything else, this is a political position.

For: Tunisian FM warns against the spread of extremist groups in Libya