Tunisian security forces have killed 21 militants after they launched a cross-border raid from Libya, the government says.

Fighting followed an attack on an army base and a police station in the eastern town of Ben Guerdane.

Four civilians were also killed in the clashes, according to the interior ministry.

There is concern in Tunisia about the threat from Islamist fighters based in Libya being able to cross the border.

All entrances to the town have been shut, including the Ras Jdeir border crossing with Libya, the BBC’s Rana Jawad reports from the capital, Tunis. 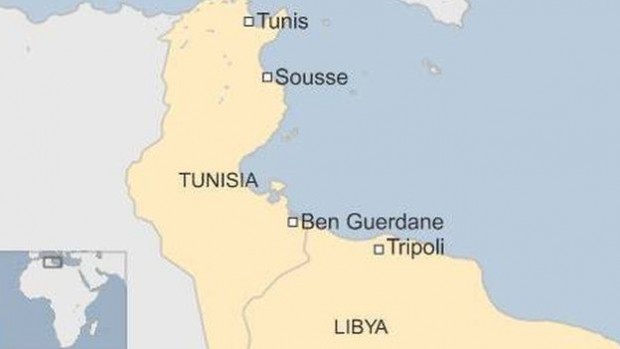 Last week, Tunisian forces killed five militants in the same area after they had entered Tunisia with the aim of carrying out “terrorist attacks”, Tunisia’s Prime Minister Habib Essid said on his Facebook page.

In March, 22 people died when the Bardo Museum in Tunis was targeted, and in June, 38 people were killed when a gunman opened fire on tourists on the beach in Sousse.

The so-called Islamic State group, which now has a foothold in Libya, claimed responsibility for those attacks.

There was criticism at the time of Tunisia’s failure to deal with the militant threat.

The instability in Libya has allowed that threat to grow and Tunisia has responded by building a trench along the border to try and stop fighters infiltrating.