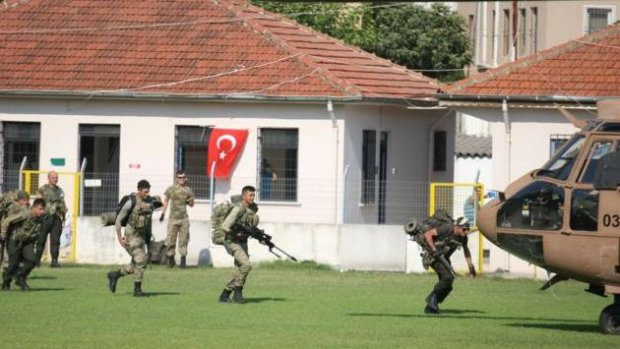 Turkey has arrested 11 fugitive soldiers described as a “death squad” sent to President Recep Tayyip Erdogan’s hotel on the night of a failed coup, the deputy prime minister said on Monday.

Erdogan was staying in the western seaside resort of Marmaris on 15 July but fled to Istanbul just before the hotel came under attack from rebel soldiers.

“Eleven of them were captured in Ula,” Deputy Prime Minister Numan Kurtulmus said after a cabinet meeting, referring to a town near Marmaris.

He said one soldier was still at large.

Erdogan earlier said his swift escape had saved him from being killed or taken hostage.

An interior ministry official, who declined to be named, described the arrested men as members of a “death squad” and said the overnight operation to catch them followed a tip-off from local villagers.

The soldiers had been hiding in the wild landscape above Marmaris since the military action, and the villagers spotted them while they were out boar-hunting.

“There was an exchange of fire during the operation,” the official added. “Drones and helicopters were used to pinpoint the location.”

Since the coup, Erdogan has launched a wide-reaching purge of Turkish institutions, especially the military, with more than 3,000 armed forces personnel dismissed.