France’s foreign ministry has urged Turkey to end its assault on Kurdish fighters in northern Syria.

In a statement (in French) it said it was “worried about the continued worsening of the situation”.

On Saturday, Turkey began shelling the militia, which it says is linked to the banned Kurdistan Workers Party (PKK).

The fighters, the YPG militia based in Syria, have rejected Turkey’s demand to leave areas it has seized, saying Islamists would return if it left.

Turkey’s assault is a new thread in an already-complex conflict that has drawn in competing regional powers.

Turkish Prime Minister Ahmet Davutoglu insisted on Sunday that Turkey “will not permit the [Kurdish militia] to carry out aggressive acts”.

“Our security forces gave the necessary response and will continue to do so,” Mr Davutoglu said.

Syria has also condemned the Turkish action as a violation of its sovereignty and asked the UN Security Council to intervene.

France also called on the Syrian regime and its allies to stop their bombardments “across the whole of the country”.

France said priority should be given to implementing an agreement reached in Munich this week on ceasing hostilities, and the fight against so-called Islamic State (IS) group.

Almost five years of civil war in Syria have led to the deaths of more than 250,000 people. More than 11 million people have been displaced.

Attempts to broker a peace deal have repeatedly failed, but on Thursday, world leaders agreed to work towards a so-called cessation of hostilities in Syria within a week.

The US and Russian presidents agreed in a “frank and business-like” phone call to work more closely to achieve this, the Kremlin said on Sunday.

Russia, an ally of Syrian President Bashar al-Assad, has been carrying out air strikes since September against what it terms “terrorists”. 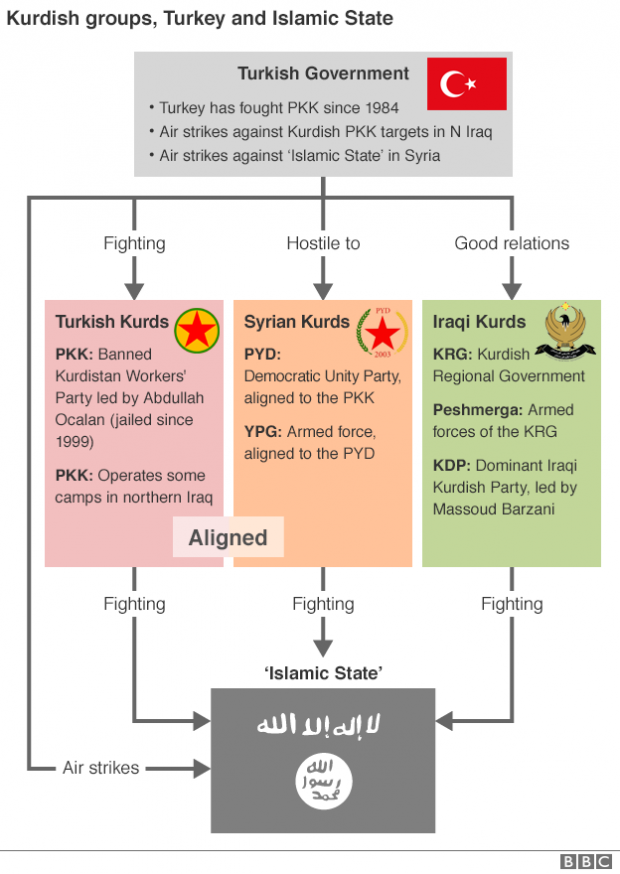 Among the targets shelled by Turkey is the Menagh airbase, which was seized by the YPG on Thursday from Syrian Islamist rebels. The YPG controls much of Syria’s northern border with Turkey.

Syria’s war hardly needs a new front, but another has now opened up.

Ankara sees the Kurdish PYD party and its YPG militia as terrorist organisations. It’s worried that weapons are seeping over the border from Syria to the PKK, with which Turkey has renewed its armed conflict since a ceasefire broke down last year.

Washington rejects Ankara’s view that the PYD is a terrorist organisation, seeing it instead as an effective ally against so-called Islamic State (IS). That has caused rifts between the two Nato allies and is hampering international peace talks.

Syria is the stage for several proxy wars, and Turkey has just started another, going after its Kurdish nemesis there and vowing to stop the PYD from cementing control of northern Syria.

Turkey’s state-run Anadolu Agency said Turkish forces shot at Kurdish fighters inside Syria on Sunday after coming under fire themselves.

Ankara sees the group as being linked with Kurdish guerrillas from PKK, which has waged a campaign against security forces in Turkey for decades.

Saudi Arabia confirmed its jets, which are taking part in sorties against IS, were now stationed at the Incirlik air base in Turkey

It comes a day after Turkey’s Foreign Minister Mevlut Cavusoglu said troops from his country and Saudi Arabia could participate in a ground operation against IS forces.

Under the agreed cessation of hostilities plan, efforts will be made to try to make urgent aid deliveries to besieged and hard-to-reach areas in Syria.

Steps will also be taken to work towards an eventual ceasefire and implementation of a UN-backed plan for political transition in Syria.

The halt would not apply to the battle against the jihadists of IS and al-Nusra Front.

However, neither the Syrian government nor the rebels were involved in the deal and both have since vowed to continue fighting.

Syrian President Bashar al-Assad said on Friday that he intended to retake “the whole country” from rebels – a statement the US government said was “deluded”.

Syrian government forces, backed by Russian air strikes, have almost encircled rebels in parts of the northern city of Aleppo.

Also on Sunday, Russian Prime Minister Dmitry Medvedev repeated a warning that any foreign ground operation in Syria would lead to “a full-fledged, long war”.

Turkey has said its troops and forces from Saudi Arabia might participate in a ground operation against IS.

For: Turkey continues bombing Kurds’ positions in Syria for the second day