Turkish, Indian and Bangladeshi men rescued from IS grip in Sirte by Libyan forces 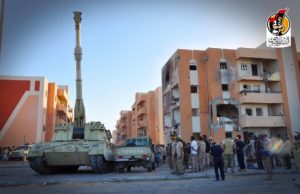 The Libyan forces have freed five foreign nationals held by IS in Sirte after heavy fighting in their battle to capture the final district of the city, a local official said on Thursday.

Two of the freed foreigners were from Turkey, two from India and one from Bangladesh, said Rida Issa, a spokesman for the Bonyan Marsous forces which have been battling for six months against militants in Sirte.

“There was a desperate resistance by Daesh, but it was confronted by heavy weapons,” Issa said, using one of the Arabic names for Islamic State.

Forces from the western city of Misrata, allied with the U.N.-backed government in Tripoli, have been leading the battle to oust Islamic State from Sirte, helped since August by U.S. air strikes and small teams of Western special forces.

But they have been facing fierce resistance from snipers, car bombs and booby-traps as Islamic State fighters dig in for house-to-house fighting in the last residential districts held by the militant group.

On Thursday, pro-government forces killed at least 20 Islamic State fighters as they pushed into the 600 District of Sirte, one of the last held by militants who control an area now less than one square kilometer, local officials said.

After facing heavy casualties at the start of the campaign, Misrata forces have increasingly turned to the use of tanks and armed vehicles to clear a path for ground troops.

No details were given about how or where the five foreigners where captured, but Islamic State has attacked oilfields and kidnapped foreign workers over the last two years.

In May 2015, the group kidnapped a Czech, an Austrian and a Bangladeshi among other foreigners when they overran an oilfield in the south of Sirte. In February last year, they beheaded a group of Egyptian Christians captured in Libya.

For: Turkish, Indian and Bangladeshi men rescued from IS grip in Sirte by Libyan forces