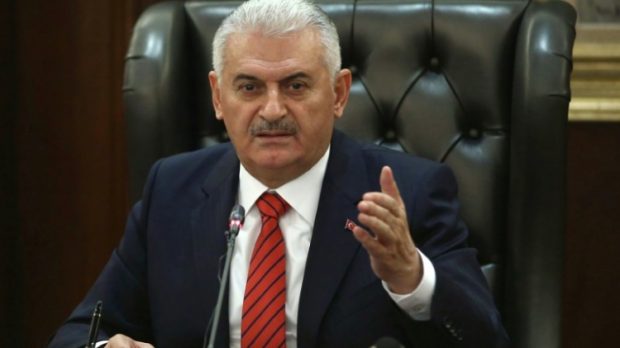 Prime Minister Binali Yıldırım vowed on July 13 that Turkey will eventually normalize relations with Syria, saying such a move was necessary amid ongoing efforts to restore diplomatic ties with Israel and Russia.

“We will expand the circle of friendship as far as possible. This is our aim. We will expand the circle of friendship inside and outside the country. We have already begun to do this. We have returned our relations with Israel and Russia to normal. I am sure that we will return to normal relations with Syria as well. We need that. Syria and Iraq need to reach stability for success in the fight against terror,” Yıldırım said at a meeting of ruling Justice and Development Party (AKP) provincial leaders in the capital Ankara.

“Our heart is rich. We will increase our population and number of citizens, just as we have shared the food and bread of this homeland,” Yıldırım said.

“It has once again been revealed that some have malicious intent on the issue, despite necessary statements that were made. It has been seen that no one else cares about the future of Syrians. Citizenship is something that has existed for many years of human history. Countries naturalize and denaturalize. Those have rules, standards and conditions. Anyone who fulfills those conditions is naturalized. It is out of question that people involved in particular crimes, terrorism crimes, or have been involved in other illegal affairs, can ever be granted citizenship,” he added.

“Merciless accusations against those who have been left stateless, homeless and searching for a safe port, an honorable people who have escaped death, do not exist in the genes of the Turkish nation or in its traditions. If we extend a hand for those who are in trouble, particularly Syrians, we are doing this as a necessity of our humanity and faith,” Yıldırım said.

President Recep Tayyip Erdoğan ignited the citizenship debate on July 2 when he said Syrians in Turkey could be granted citizenship if they filed an application and met particular criteria.

Interior Minister Efkan Ala subsequently said only Syrians whose citizenship would be “beneficial” for Turkey’s interests would be offered identity cards.

The suggestion has been slammed by members of all three opposition parties as a political move aimed at garnering the votes of Syrians and tilting sensitive demographic balances in the country’s southeast.

Both the main opposition Republican People’s Party (CHP) and the Peoples’ Democratic Party (HDP) have said Turkey should hold a referendum on the issue.

Meanwhile, Nationalist Movement Party (MHP) leader Devlet Bahçeli has similarly slammed the idea of granting Turkish citizenship to Syrian refugees, also saying the issue is not within the authority of the presidency.

“The social dilemmas caused by Syrians threaten the peace of society,” Bahçeli said.