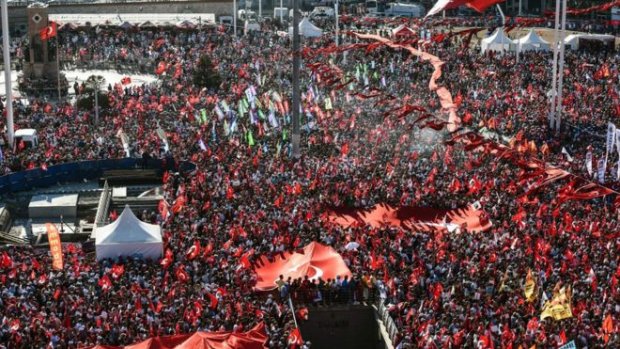 Tens of thousands of people have joined a pro-democracy rally in Istanbul, condemning the nation’s attempted coup.

The rally was organised by the opposition party CHP but was backed by President Recep Tayyip Erdogan’s AK party, in a rare show of unity.

Amid a sea of red flags, banners bore slogans such as “We defend the republic!”

The CHP’s leader said “democracy won!” but he also warned against the dangers of authoritarianism.

One banner read: “No to the coup, no to dictatorship”.
‘Turkey stood proudly’

Many of the CHP supporters gathered in Taksim Square waved flags with a picture of Mustafa Kemal Ataturk, the founder of modern Turkey.

For: Turkish people go on pro-democracy rally in Istanbul