Two ISIS-linked gunmen kill a priest in a French church 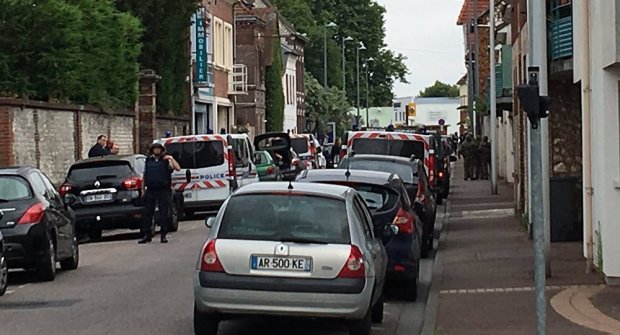 A priest has been killed in an attack by two armed men at his church in a suburb of Rouen in northern France.

The attackers entered the church in Saint-Etienne-du-Rouvray during Mass, taking the priest, Fr Jacques Hamel, 84, and four other people hostage.

President Francois Hollande said the men claimed to be from so-called Islamic State (IS).

Speaking in Saint-Etienne-du-Rouvray, he said the attackers had committed a “cowardly assassination” and France would fight IS “by all means”.

The IS-linked Amaq news agency said “two soldiers of the Islamic State” had carried out the attack.Pope Francis decried the “pain and horror of this absurd violence”.

French interior ministry spokesman, Pierre-Henri Brandet, said one of the hostages had been critically wounded.

Five people were inside the church in Saint-Etienne-du-Rouvray when it was attacked. He said the hostage-takers had been “neutralised” after coming out of the church. Police were now searching the church for explosives.

Police sources said it appeared the attackers had slit the priest’s throat with a knife. The area has been cordoned off and police have told people to stay away. Mr Brandet said the investigation into the incident would be led by anti-terrorism prosecutors.
One of the men was known to the French intelligence services, French TV channel M6 has reported.

For: Two ISIS-linked gunmen kill a priest in a French church