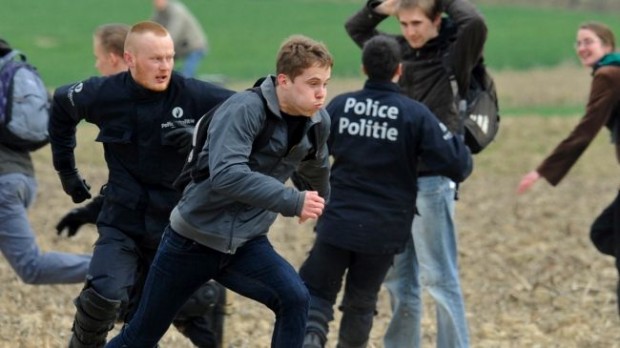 The federal prosecutor’s office in Brussels, the home of the European Union, said police seized military-style uniforms and Islamic State propaganda in the raids on Sunday and Monday.

Investigators said the police action was not linked to the wave of deadly attacks in Paris in November which France says were prepared in Belgium.

One of the two suspects was arrested on suspicion of planning attacks as well as “playing a lead role in the activities of a terrorist group and recruiting for terrorist acts,” the prosecutor’s office said in a statement.

The second faced charges of planning and “participating in the activities of a terrorist group,” it said.

“The investigation cast a light on serious threats of attacks believed to be aimed at several emblematic sites in Brussels and which would be carried out during the end-of-year celebrations.”

The suspects were arrested during raids in the Brussels area, in Flemish Brabant and near the southern French-speaking city of Liege.

The raids were ordered by an investigating magistrate in Brussels who specialises in terrorism cases.

A total of six people were detained, including the two suspected of plotting attacks. Four were later released, the prosecutor’s office said.

The Belgian authorities are still looking for suspects linked to the 13 November attacks on a Paris concert hall, restaurants, bars and the national stadium which left 130 people dead.

French police have used national state of emergency powers to conduct 2,700 raids and place 360 people under house arrest since the Islamic State group’s attacks in November.

A worldwide search has been underway for Salah Abdeslam, 26, who is thought to have been the driver of a black Renault Clio that dropped off three suicide bombers near the Stade de France the night of 13 November.

Earlier this month, news reports revealed that Belgian police had waited hours to search a house for Abdeslam because of a law that prevented such searches between 9 pm and 5 am.

By the time Belgian authorities searched a house in the Brussels suburb of Molenbeek days after the attacks, the Belgium-born French national was not present.

Belgium changed the law on 11 December to allow house searches 24 hours a day in terrorism investigations.

Authorities had already missed one chance to capture Abdeslam, who was driving toward the Belgian border when police stopped and questioned him a few hours after the attacks. He was not detained, and the car was found in Molenbeek, where his family lives.