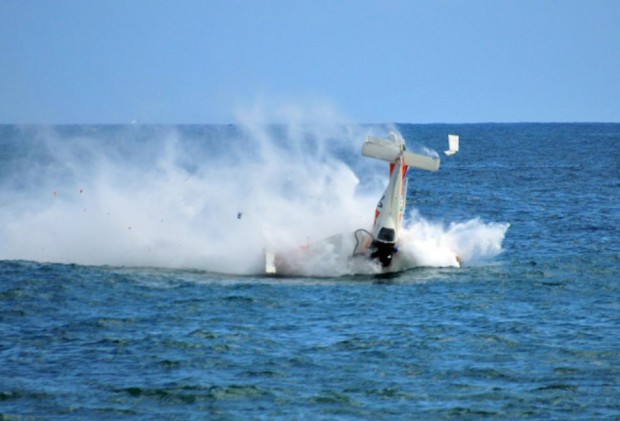 Two planes went down off the coast of Los Angeles on Friday in what could have been an in-flight collision, the Coast Guard said.

Though authorities have not been able to confirm the two crashed, a local fisherman reported a downed aircraft to the Coast Guard just after 3 p.m. local time — the same time the Federal Aviation Administration reported seeing two planes on radar disappear, Capt. Jennifer Williams said at a news conference on Friday.

“We are speculating to some degree that there were two aircraft, but it would be unusual for one just to go down with that amount of debris field,” Williams said.

Authorities discovered a log book that helped them identify one of the planes and people on board — two men, ages 61 and 81.

Another plane, believed to be piloted by a 72-year-old woman, was expected to arrive at Torrance airport earlier Friday but never showed, Williams said.

One of the aircraft was a Beechcraft and the other was a Super Decathlon, a plane that’s often used for aerobatic stunts.

Dozens of officials from various federal and local authorities are conducting what the Coast Guard is still classifying as a rescue operation.

“We don’t want to give up on anybody that potentially is out there,” Williams said. “It’s cold water, but it is possible to survive in those temperatures.”

Diving operations were suspended at sunset, but are expected to resume in the morning.

“In the morning, after our first-light search by helicopter, we will have to reevaluate where we are with the search, whether or not it’s feasible that someone could survive that long and perhaps transition to another type of search,” Williams said.

Based on brief conversations with family members, Williams believes the pilots were experienced. All three of the missing people are from Southern California.

The incident occurred near the community of San Pedro, south of downtown Los Angeles and just west of Long Beach.

For: U.S.A.: Two planes went down off Los Angeles coast