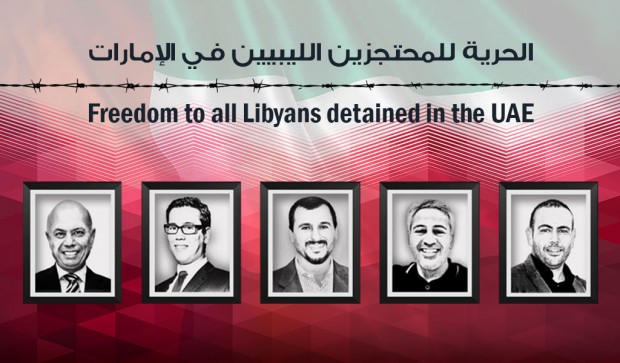 Terrorism charges have been dropped against a Libyan-Canadian, two Libyan-Americans and a Libyan detained for more than 550 days in the United Arab Emirates, but the four remain in custody on downgraded charges.

Salim Alaradi, a Canadian-Libyan, and Kamal and Mohamed Eldarat, a Libyan-American father and son, were arrested by state security officials in August 2014 along with Libyan Issa al Manna.

After more than a year in detention and amid allegations of torture, the four were charged with funding, supporting and cooperating with alleged terrorist organisations.

On Monday, the lawyer for Alaradi said the terrorism charges had been dropped for all four men. “It came as quite a surprise to us all,” said Paul Champ.

The charges related to support allegedly given by the four businessmen to two militias, Libya Dawn and the February 17 Martyrs Brigade, which emerged during the 2011 revolution in Libya. The four have denied having any relationship with or providing any support to the militias.

The men now face less serious chargesfor providing supplies to groups in a foreign country and collecting donations without the UAE government’s permission, Champ said. They remain in custody in the UAE until 11 April, when the trial is due back in court.

Champ was encouraged by Monday’s development, describing it as significant. “The fact that they’re changing course now suggests to me that they’re concerned that Mr Alaradi might actually get a fair trial.”

But the families of those detained were more apprehensive about the latest chapter in their long ordeal, with the daughter of Kamal Eldarat questioning the sudden decision to drop the terrorism charges.

“Today’s change of course is deeply concerning,” said Amal Eldarat in a statement. “For more than a year and a half, the UAE government has had time to investigate the alleged charges against my brother and father and proceed with presenting their case. Now, after more than 550 days, they have been forced to recognize what my family and I have said along – Kamal and Mohamed are innocent of all terrorism charges.”

She called on US officials to pressure the UAE to release her father and brother, who could face up to 15 years in prison if found guilty of the new charges. “This continues to be an indescribable nightmare that will only end when my brother and father are allowed to return home.”

In Canada, the Alaradi family expressed similar trepidation over the decision. “This change is not good,” said 18-year-old Marwa Alaradi, whose father was on vacation in Dubai with his family when he was arrested. “How can a state security who held my father for 550 days, more than enough time to investigate, come at the end of the trial and change the whole charge?”
Advertisement

After two Libyans facing similar charges in the UAE were acquitted last week, she worried the prosecutor had downgraded the charge against her father in order to ensure a guilty verdict. “So this charge or the old charge – it is all fabricated. The closer we get to his innocence, the more the UAE state security plays games with his freedom.”

She urged Canadian officials to intervene. “I hope the government will negotiate and somehow force the UAE to get my father home to us.”

The trial has attracted international attention, including criticisms from groups such as Human Rights Watch and Amnesty International over the UAE’s treatment of the detainees. In February, a report by the UN working group on arbitrary detention called for the immediate release of the four men, documenting the men’s claims that they were subjected to electric shocks, whipped, had guns held to their heads, were drugged and “hung with a rope around the neck”.

Some said they had been placed in a freezer for up to 45 minutes, said the report. “The suspects have been also allegedly held incommunicado in secret detention locations and in solitary confinement for prolonged periods of time,” said Juan Méndez, the UN special rapporteur on torture.