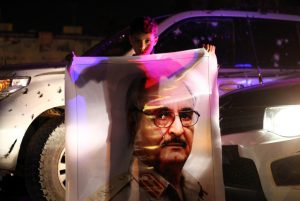 MEE has previously reported on the presence of UAE personnel in an international operations room at the Benina air base in Haftar-controlled Benghazi but the new tapes offer the first confirmation of the presence of the Gulf state’s pilots in the skies over Libya as well.

In one audio file, a pilot with an Emirati accent is heard relaying coordinates to a Libyan officer in the operations room. He is then told to “check for movement” because they “don’t want to waste any bombs”.

The exclusive comes as Haftar’s forces were reported on Monday to have seized a third oil terminal in the east of the country on behalf of the Tobruk-based House of Representatives (HoR), a rival administration to the UN-backed Government of National Accord (GNA) in Tripoli.

The advance by Haftar’s forces was condemned by the US, France, the UK, Germany, Italy and Spain in a statement calling for an immediate ceasefire.

Yet pilots and air traffic controllers speaking in Arabic and American-, British-, French- and Italian-accented English can be heard in the latest batch of tapes, confirming the international nature of the air operation in support of Haftar’s campaign to gain control of eastern Libya from groups he has declared to be “extremists”.

Relevantly, the Tobruk-based House of Representatives (HOR) promoted on Wednesday Khalifa Haftar to a Marshal after the attacks he orchestrated on the oil ports in the oil crescent region.

The US, the UK, Italy, Germany, Spain and France issued a joint statement on Monday condemning the Khalifa Haftar-led Dignity Operation attack on oil ports in the oil crescent region, calling on both parties to immediately cease fire and stop any violent acts that can destroy or sabotage the facilities and plunge Libya into a dilemma regarding exportation of oil.