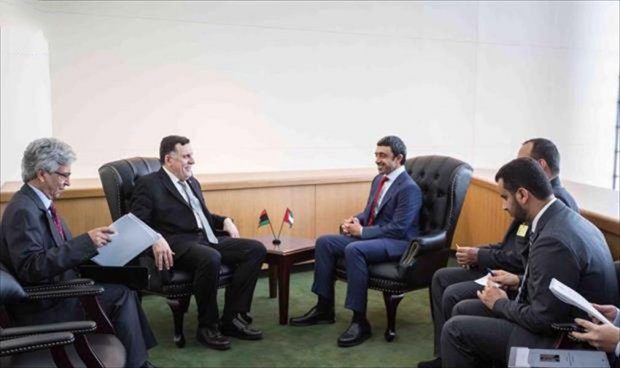 The Head of the UN-backed Presidential Council, Fayez Al-Serraj, met Friday with the UAE Foreign Minister, Abdullah Ben Zayed, on the sidelines of the UN General Assembly meetings in New York, US.

The Director of the Media Office of Al-Serraj stated that the Emirati Foreign Minister reaffirmed that his country feels a great deal of responsibility toward establishing stability in Libya, referring to the fact that it was one of the first countries that called for supporting 17 February revolution against Gaddafi’s regime.

“Ben Zayed also reiterated his country’s support for the unity attempts in Libya, saying the UAE will do all it can to help Libya overcome the current crisis.” the media office director added.

Al-Serraj, on the other hand, confirmed to the UAE Foreign Minister that he is ready to meet with all the Libyan parties – pro and anti GNA – saying the well-being of the country surpasses all other interests.

Al-Serraj also told the UAE Foreign Minister about the comprehensive reconciliation initiative that he announced in his speech at the UN General Assembly, which he said it aims at uniting all Libyans inside and outside the country, without eliminating anyone.