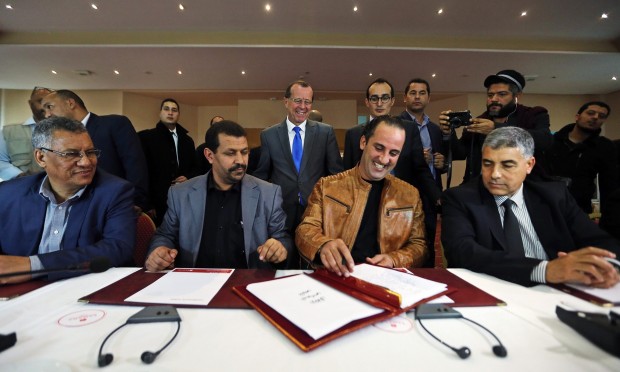 The United Nations security council voted on Wednesday to endorse an agreement between rival Libyan political factions to form a government of national unity.

The 15-nation body gave its support to the deal signed last week in the Moroccan town of Skhirat between representatives of strife-torn Libya’s two competing regimes.

Britain’s ambassador to the United Nations, Matthew Rycroft, presented the motion and dubbed it “a strong collective sign of our commitment to Libya’s sovereignty, territorial integrity and national unity”.

“But it is only the start of a process,” he warned.

Libya has been in chaos since the 2011 uprising that toppled dictator Muammar Gaddafi, with armed factions battling for territory and control of its oil wealth.

The internationally recognised government was expelled from Tripoli in August 2014 and is based in the east of the country, while another Islamist-backed body holds the capital.

On 17 December, under UN guidance, envoys from both sides and a number of independent political figures signed a deal to unify the government.

About 80 of 188 lawmakers from Libya’s internationally recognised parliament and 50 of 136 members of the rival Tripoli-based General National Congress signed the deal.

It calls for a 17-member government, headed by businessman Fayez el-Sarraj as premier, based in the Libyan capital. A presidential council would also serve for a transitional period of two years until legislative elections.

The United Nations envoy to Libya, Martin Kobler, is now working on arrangements to allow the unity government to safely set up shop in Tripoli, which is under the control of militia fighters.

The unity deal does not include the extremist Islamic State group, which is gaining strength in Libya and has seized a pocket of territory around Gaddafi’s hometown of Sirte.

Wednesday’s UN resolution does not mean that UK airstrikes on Isis targets in Libya are imminent. Unlike after the Commons vote to extend airstrikes to Syria, RAF planes are not sitting ready to launch the first strike within hours.

No military intervention is expected until well after the Christmas and New Year holiday season is over.

The Libyan government first has to invite the UK and other international forces to help in the fight against Isis, whose influence has been spreading quickly. After the invitation has been issued, the UK will enter into discussions with Italy, which is to lead the international coalition, about targets and dispositions.

As well as potentially contributing to airstrikes, the UK is offering to send troops to Libya to help train government forces. But all decisions are on hold until a small international military team, which includes half a dozen UK officers, conducts a scoping mission to Libya and reports back on what is feasible.