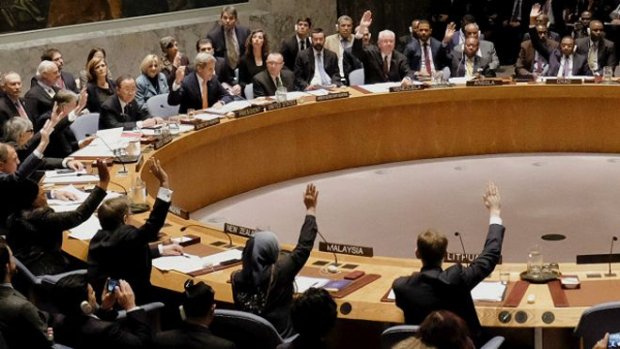 The United Nations Security Council on Friday authorized U.N. countries to help eliminate Libya’s stockpile of chemicals that could be used to develop toxic weapons amid concern they could fall into the hands of militant groups.

Libyan authorities told the global chemical weapons watchdog, the Organization for the Prohibition of Chemical Weapons (OPCW), last Saturday that the country’s remaining precursor chemicals had been moved to a temporary storage site in the north of the country and asked for help to destroy them outside of Libya.

In a unanimously adopted, British-drafted resolution, the 15-member Security Council determined “that the potential for acquisition by non-State actors of chemical weapons in Libya represents a threat to international peace and security.”

Islamic State gained a foothold in Libya amid the political chaos and security vacuum that developed after long-time ruler Muammar Gaddafi was toppled in an uprising in 2011. Al Qaeda-linked militant group Ansar al Sharia also has a presence.

British Foreign Secretary Boris Johnson said the resolution “marks the beginning of the end of the Libyan chemical weapons program” by authorizing the removal of the precursors from Libya to be destroyed in another country.

“In doing so, we have reduced the risk of these weapons falling into the hands of terrorists and fanatics,” Johnson said during his first appearance at the U.N. Security Council since being appointed last week.

The Security Council authorized “member states to acquire, control, transport, transfer and destroy chemical weapons identified by the Director-General of the OPCW … to ensure the elimination of Libya’s chemical weapons stockpile in the soonest and safest manner, with appropriate consultations with the Government of National Accord.”

Russia’s U.N. Ambassador Vitaly Churkin said the adoption of the resolution on Friday was relevant “given there’s been a springing up of terrorist groups in Libya.”

“There was an imminent threat of danger that these things would fall into terrorist hands. The examples of Syria and Iraq have demonstrated the topical nature of the problem of chemical terrorism for the region,” Churkin said.

The OPCW is helping Libya come up with a modified plan to destroy the chemicals. Libya said in February 2014 it had destroyed weapons that were ready for use, including armed munitions and the most deadly, or category 1, toxins with the help of Western states.

For: UNSC votes to eliminate Libya’s stockpile of chemicals