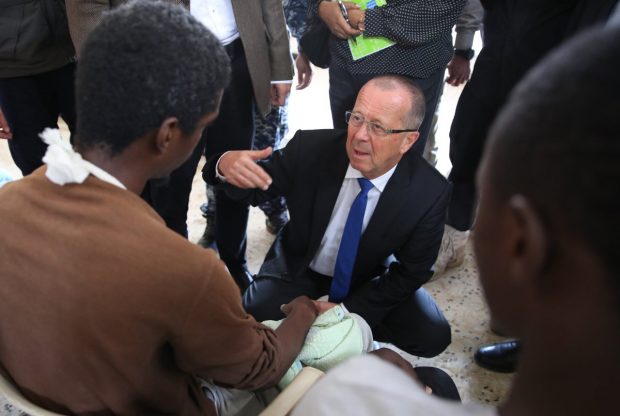 The UN delegate to Libya, Martin Kobler visited Wednesday one of the immigrants shelter centers in Tripoli to review the status of the people held in there.

Kobler was accompanied by officials from the Illegal Immigration Interception Authority.

Martin Kobler stressed that the shelter center was below the least needed living standards for the immigrants held in there as 500 people are sharing one hall and two toilets with very bad conditions.

“There were children, women, pregnant women, and also men who were all in need for medical care.” Kobler reaffirmed.

He also commented with a tougher tone saying that the immigrants have every right to be treated with dignity as human beings.

“The Illegal Immigration Interception Authority is doing its best to provide for those immigrants, yet it lacks the needed support and assistance to do so for 7000 migrants divided on 20 shelter centers.” The UNSMIL Head indicated.

He also called on the international community and the Government of National Accord to raise the funds allocated for the food, housing, and healthcare supplies as those lie at the top of the migrants’ needs.