One suspect has been shot dead, officials say, and as many as two others are said to be on the run after a counter-terrorism raid in Brussels.

The suspects were believed to have been barricaded in a flat after earlier firing shots at the police.

Four police officers were wounded in the south Brussels suburb of Forest.

The raid was linked to last year’s Paris attacks in which 130 people died. Islamic State (IS) militants have claimed responsibility for the attacks.

Belgian Prime Minister Charles Michel said a French policewoman was one of the officers wounded in the raid on the flat.

Eric Van Der Sypt, a spokesman for the federal prosecutor, had earlier confirmed that “police were fired at” during the operation, and confirmed it was “linked to the Paris attacks investigation”.

A major police operation was launched, with helicopters flying overhead and roads blocked in an area of Forest close to railway lines used by high-speed trains to London and Paris. Two local schools and two kindergartens were in lockdown.

Local media also reported that police had surrounded a flat before further shots were fired.

“One body has been found during a search of the house in the Rue du Dries. His identity isn’t yet known but in any case it’s not that of Salah Abdeslam,” said the prosecutor’s spokesman.

Abdeslam is one of two suspects still on the run after the 13 November attacks in Paris. French police sources had said earlier that he was not the target of Tuesday’s raid.

With the operation at that apartment over, police told the BBC they were widening their search of the area – possibly involving a second location.

The BBC’s Anna Holligan at the scene says a huge police presence remains, with heavily armed officers on the streets and helicopters hovering overhead.

She says it is still unclear how many, if any, suspects remain at large. 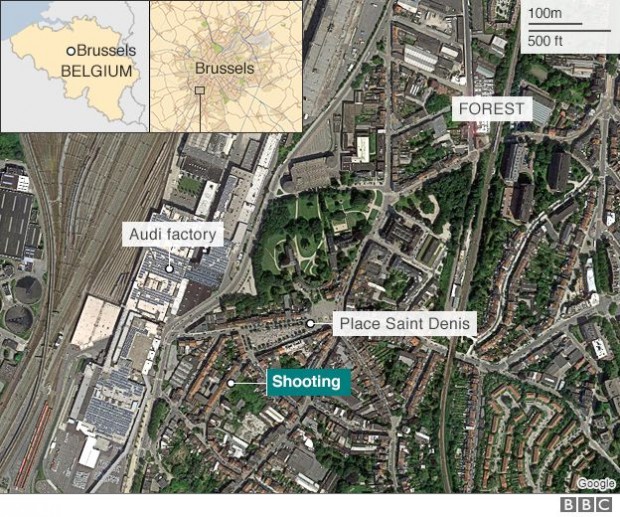 Since the 13 November attacks, officials have identified most of the people they believe to have carried out the assaults.

Most of the suspects either died during the attacks or were killed in subsequent police raids.

In addition, 11 people have been arrested and charged in Belgium in connection with the killings. Another eight are still in detention.

Parts of Brussels were sealed off for days after the Paris massacre amid fears of a major incident. A number of suspected attackers lived in the Belgian capital.

Police have also carried out a series of raids in the city.

For: Update: Terror suspect killed in Brussels by police