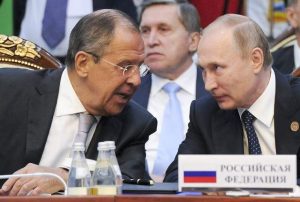 Aircraft flew in from Iraq and bombed Syrian troops near Deir al-Zour airport, allowing the IS jihadists to advance, the Russians said.
The US has not yet commented.

Russia earlier expressed fears the current ceasefire in Syria could collapse, saying the US would be to blame. The cessation of hostilities does not include attacks by the US on IS or other jihadist groups.

Russia’s defence ministry said that if the US air strikes turned out to be an error, it would be because of Washington’s stubborn refusal to co-ordinate military action with Moscow.

Only if the current ceasefire – which began on Monday – holds for seven days, will the US and Russia begin co-ordinated action against the Jabhat Fateh al-Sham group, which was previously known as the al-Nusra Front, and IS.

Russia’s defence ministry quoted a statement by Syrian army general command as saying that coalition jets had bombed a Syrian army position at Jebel Tharda near Deir al-Zour. The four strikes had allowed IS to advance.

The Syrian statement said the air strikes were “conclusive evidence” that the US and its allies supported the jihadist group.
The Syrian Observatory for Human Rights monitoring group put the death toll at at least 80.

Russian defence ministry spokesman Maj-Gen Igor Konashenkov said the attack was on Syrian troops surrounded by IS fighters and was carried out by two F-16 and two A10 aircraft flying in from Iraq.

There have been no confirmed cases of US air strikes targeting Syrian troops. Last December, Syria accused the coalition of attacking a government army camp in Deir al-Zour but the US denied it.

For: US airstrikes kill over 62 Syrian government soldiers near Deir Al-Zour airport