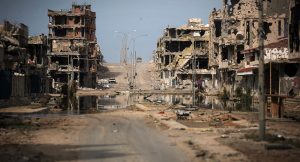 US forces have so far conducted 36 airstrikes on IS positions in the Libyan city of Sirte in the past three days, striking 91 IS fighting positions, the US Africa Command (AFRICOM) said in a press release on Monday.

“This…brings the total number of airstrikes in support of Operation Odyssey Lightning, which began Aug. 1, to 324,” the release added.

On Friday, US forces conducted 24 airstrikes, hitting 62 IS fighting positions and a command and control facility, the release said.

Africa Command said the airstrikes, conducted in support of Libya’s Government of National Accord, will help deny the IS militants a safe haven in Libya from which it could attack the United States.

For: US airstrikes on IS in Libya’s Sirte reached 36 in three days