US ambassador voices renewed support for Libyan Government of National Accord 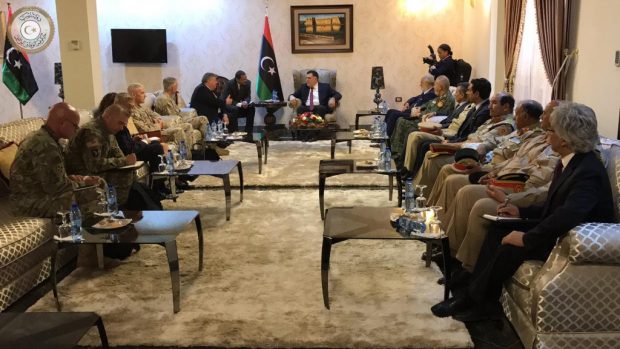 The U.S. ambassador to Libya pledged Washington’s support for its U.N.-backed government and urged rival factions to avoid civil war, as he made a brief visit to the country on Tuesday for the first time in nearly three years.
Peter Bodde, who is based in Tunis, and Marine General Thomas Waldhauser, the top U.S. military commander overseeing troops in Africa, flew into Tripoli for two hours to meet the prime minister of Libya’s Government of National Accord (GNA) and other senior officials, Reuters said.

The trip comes after uncertainty over U.S. policy in Libya following Donald Trump’s election as president in November. Trump said in April he did not see a role for the United States in Libya apart from defeating Islamic State, Reuters added.

“The visit today demonstrates the continued commitment of the United States to the Government of National Accord and to political reconciliation in Libya,” Bodde told reporters, according to Reuters.

“We call on all Libyans to avoid further conflict that could lead to a civil war and would enable terrorism and increased social and economic hardships,” said Bodde, adding “We applaud the ongoing Libyan dialogue on how to form a government that has broad acceptance across Libya.” Reuters reported.

Al-Serraj said his government would submit a request to the United Nations this week to lift its arms embargo on Libya.

Ambassador Bodde paid tribute to GNA-aligned forces that defeated Islamic State in their North African stronghold of Sirte last year, and to progress against Islamist extremists in Benghazi, where Haftar’s forces have been fighting for three years, Reuters went on.

“We are working closely with Libya to expand its counter-terrorism capacity and stand ready to help Libya train professional armed forces as we strengthen cooperation on our shared regional security goals,” he said, as Reuters reported.

For: US ambassador voices renewed support for Libyan Government of National Accord