BY Libyan Express May 30, 2019 - 22:55 Updated: May 31, 2019 - 03:17
Four US Senators from the Committee on Foreign Affairs have sent a letter to the US President Donald Trump about the ongoing Tripoli fighting, voicing concerns over the military escalation in Libya.

The Senators, including Republican Lindsey Graham, told Trump that some neighboring countries of Libya are fueling the fighting by supporting their allies inside the country and this “goes against the US policy.”

“Our concern has mounted since the Tripoli offensive led by Khalifa Haftar, which caused many deaths, injuries and displacements. This fighting could widen the circle of violence and chaos in Libya.” The letter reads.

The Senators added that the US has a good relationship with the Un-brokerd Government of National Accord (GNA) that had a successful war on terrorism in Sirte in 2016.

“We have invested huge resources in supporting GNA and it has proved to be good partner as a government led by civilian leaders.” The letter adds.

The Senators also indicated that there can be no military solution in Libya, urging President Trump to publicly work on forcing a ceasefire in Tripoli and supporting the efforts of the UN, using all kinds of diplomatic pressure to help start a civilian-led transition in Libya. 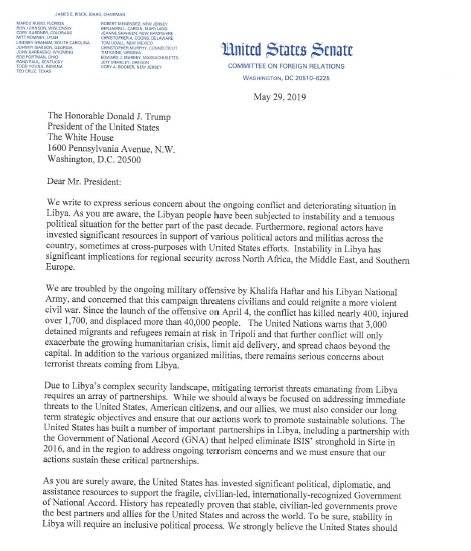 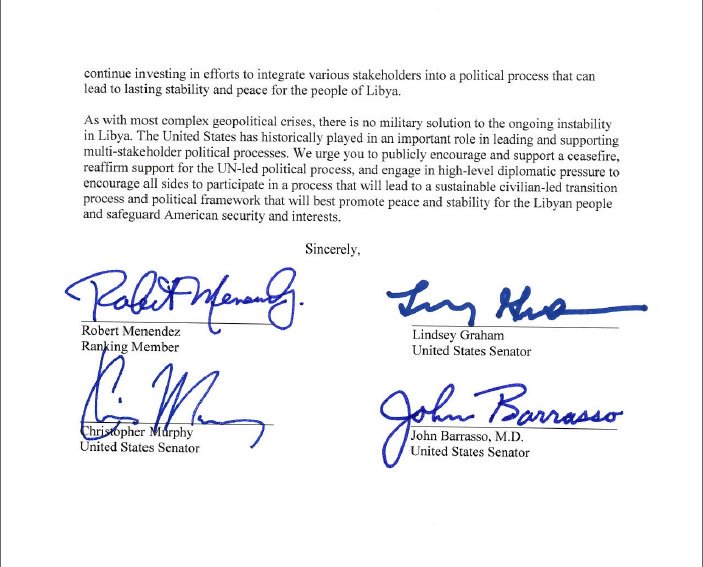 The views expressed in Op-Ed pieces are those of the author and do not purport to reflect the opinions or views of Libyan Express.
How to submit an Op-Ed: Libyan Express accepts opinion articles on a wide range of topics. Submissions may be sent to oped@libyanexpress.com. Please include ‘Op-Ed’ in the subject line.
LibyaUS
Share
Submit a Correction
Sign up for our Newsletter.

Russia urge ‘restraint’ in Libya ahead of general election

For: US Senate sends Trump letter urging for pressure to end Haftar’s destabilizing attack on Tripoli