Will Facemask Modify the Veil Debate in Europe? 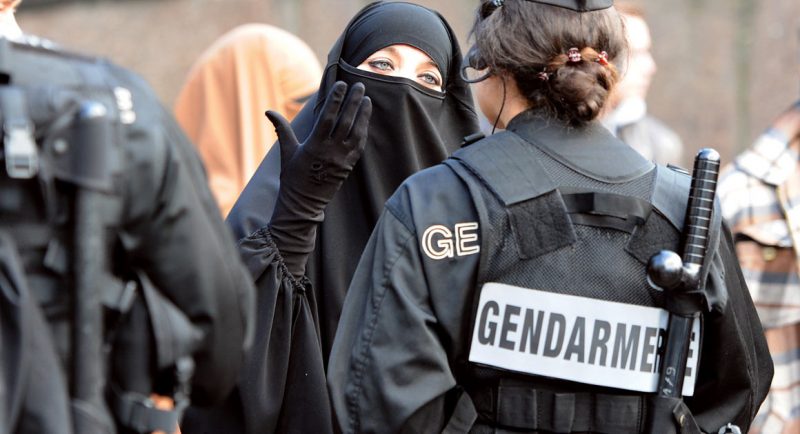 Throughout the world, governments can easily sell and buy two slogans: “Public interest” and “For Your Safety” that is what European democracies are doing now for public safety against the coronavirus.

In a similar bid, the French President Macron Emmanuel introduced a coronavirus safety face mask to French public as “National pride” because it is 100% made in France.

Hang on a minute! Is not the same France that once banned face veil for only a handful of Muslim women including French reverts? But at that time in the best interest of French society, it was revealed to the public that Muslim women face veil is a “Symbol of oppression”, “Health risk” and a “Threat” and even it could be a “National shame” because it is outdated and misfit for a modern secular society.

Fair enough! I do remember the day in 2006, I was a MA journalism student at the University Leeds. Like many other students and academics, I was shocked to know that the British parliamentarian Jack Straw had provoked anger and outrage among the British Muslim community by saying that “Visible statement of separation and difference”, was actually one of the former students union presidents.

I found that the University of Leeds, students banned him “in protest at what they said were his anti-libertarian policies”.

My owned research on veil shows how British conservative and liberal broadsheets and tabloids published a series of articles, editorials, features and comments pieces on the veil that made it a “national debate” bigger than Britain’s illegal wars and climate change.

The press perceives the veil as a clash between Muslims and non-Muslims and presents it as a “terror threat”. Besides, several leading European parliamentarians have made it a regular habit to attack the veil that is an easy way of getting media publicity.

Today, the veil is a talk of the town. Still, the majority of the people are confused and ill-informed on this subject.  Thomas Sealy raised an important question: “Is there a difference between the niqab and a face mask?”

So what is that so special in a piece of cloth which makes it a “National pride”? Obviously, if it fits into government policy it’s a pride otherwise veil can be regarded as a “Shame” and “Outdated”.

So if the veil is an outdated practice and a terror threat, then why France is driving the entire nation to adopt it? In the words of George Orwell, the veil is a perfect example of “Double Speak”.

In France, it is prohibited for a Muslim women to cover the face but she will also be fined for not wearing a face mask- Is it forcing a Muslim woman not to wear a veil is nothing less than a mental torture and abusive?.

Pity though, how a piece of cloth fosters divisions in coronavirus crisis? Mainly because Muslims are easy targets as Richard Adams summed it: “Hijab ban attempt is ‘racism dressed up as liberalism”.

When James McAuley, Washington Post, Paris correspondent posted an article, along a comment https://twitter.com/jameskmcauley, “On the ironies of mask requirements in the country that brought you burka ban” via The Washington Post article: “France mandates masks to control the coronavirus. Burqas remain banned”.

Within minutes, a thread @Washingtonpost started that turned Twitter into a battleground between supporters and opponents of veil wearing women. Everyone seems to be a scholar of Islam, a usual practice during Muslims related discussions and debates. But, how many Twitter warriors have read a chapter of the holy Qur’an An-Nisa to understand what exactly veil is?

Mostly, the western media portrays veil wearing women as “oppressed” and “backward”. The conservative press support ban on veil while the liberal press suggests that women should be free to decide.

But, is the west really concern about oppressed women? Because many European countries have treated the veil wearing Muslim women as badly as the oppressed ones elsewhere.

That is banning Muslim women wearing burka and bracketing them as “letterboxes” and “bank-robbers”. These are thoughts of the British PM Boris Johnson, so what can you expect from others?

Now compare French and Taliban views of Muslim women veil. Are they any different? Both did the same that is forced women to adopt their way of wearing, French banned veil wearing and the Taliban made it mandatory.

Isn’t the politics of veil?  Because if the west truly value women freedom it should not force them to wear or not to wear but rather give women a choice.

But it’s all politics, Katharine Viner equated, “Feminism as imperialism” and unknotted false claims of the western leaders, especially George W. Bush who “bombed Afghanistan to liberate women from burkas” then used the same logic to bomb Iraq because he did not bear the pain of Iraqi women in suffering.

Viner raised a logical point that women sufferings are everywhere, so “To justify another war. Where next? China because of its anti-girl one-child policy? India because of widow-burning outrages? Britain because of its criminally low rape conviction rate?”

Janine Rich disclosed the popular western discourse on Islam and Muslims as of the “Oppressed Muslim Women”. For decades, western powers are successfully using it to legalize their attacks on Muslim countries. Too often, sections of the western media push the debates on Muslim women using “oppression” as fascination.

Rich argues that “The complex discourses surrounding women in the Islamic world have a long and deeply political history, and this narrative has been renewed and re-utilized numerous times to garner widespread public support for Western military intervention in the Middle East”.

What the western media and polity missed to share with their public at home is that Muslim women’s rights and duties are far more in order as described in al-Qur’an. Moreover, the Afghan women were allowed to vote long before the European women.

Truth has always been there but the real issue is people don’t want it because sometimes it contradicts with their self-designed way of life.

Perhaps, a best-concluded sentence would be that it is the apolitical weapon of Europe that shows nothing but “Double Standards”. One rule for a minority and the other rule for the elites.

If the European democracy has reached to such lower level then Europe must rethink and revisit its ideas of human rights and personal freedoms.

What is Still Misunderstood in Europe?

Underneath the thread of French Macron argued that we Europeans are embracing face masks to save lives. Of course, any sensible person would agree with this argument, but what exactly is that Islam says about the veil? What does it require from a believer? What is the wisdom behind its teachings? What are their impacts and relevance to modern societies?

Going back to Life-saving argument, remember that Islam talks about life after death that is everlasting and perpetual, so why would anyone risk an everlasting loss?

They should disregard a modest practice only because a fraction of conservative Europeans don’t like it? Think if someone demands to ban drinking, smoking and drug use because it all kills and cost NHS £2.7 billion each year. Does veil cost anything to the NHS?

The irony is that we take what we like and leave what we don’t like. Think about Christianity, Judaism, and other religions that preach modesty- So why Europe is so worried about a Muslim woman only? After all, it is just a piece of cloth, isn’t it?

For: Will Facemask Modify the Veil Debate in Europe?