World leaders have opened a donor conference in London with an urgent plea for billions of pounds in aid for refugees from war-torn Syria.

Both he and UN Secretary-General Ban Ki-moon spoke of the need to get all Syrian refugee children into education within months.

Sixty countries are represented at the conference, including 30 world leaders.

It is the fourth of its kind, focusing on education and jobs for the 4.6 million Syrian refugees in neighbouring countries. Turkey is hosting the largest number.

Hours before the conference began, peace talks between the Syrian regime and opposition were suspended.

The United Nations-brokered talks in Geneva, which opened just two days ago, were expected to resume on 25 February.

Staffan de Mistura, the UN’s special envoy at the talks, admitted there had been a lack of progress but said that the negotiations had not failed.

The £6.2bn being sought on Thursday is made up of a UN appeal for £5.3bn and approximately £900m requested by regional host governments.

Part of the reason for the record request is the underfunding of previous appeals.Only 43% of the $2.9bn pledged to the UN’s 2015 appeal has so far been funded. 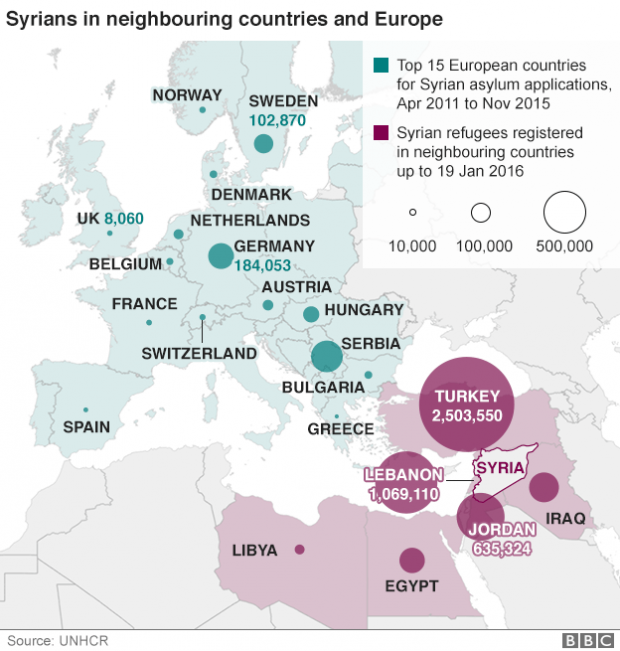 On Monday, officials told Reuters news agency that the European Union would promise €2bn ($2.2bn; £1.5bn) in aid at the conference. It pledged €1.1bn at the last gathering in Kuwait a year ago.

Officials said they would be seeking new trade and business opportunities for the countries hosting Syrian refugees, to boost their economies.

A coalition of more than 90 humanitarian and human rights groups meeting in London on Wednesday – including Amnesty International, Oxfam and the Malala Foundation – called for better access to education and jobs for refugees in Syria and neighbouring states.

Jan Egeland, Secretary General of the Norwegian Refugee Council, said: “Only an end to the fighting and a negotiated political solution will stop the suffering of ordinary Syrians, which is why it’s important that international governments push for agreements in the Geneva Syrian peace talks.”

Those talks broke up amid rebel anger over a continuing Russian bombing campaign around Aleppo, in support of an offensive by President Bashar al-Assad’s forces.

The air strikes were also criticised by the US, France and Turkey.

For: World leaders sit together in London to collect billions for Syrian refugees