At least 20 dead in a trains collision in Italy 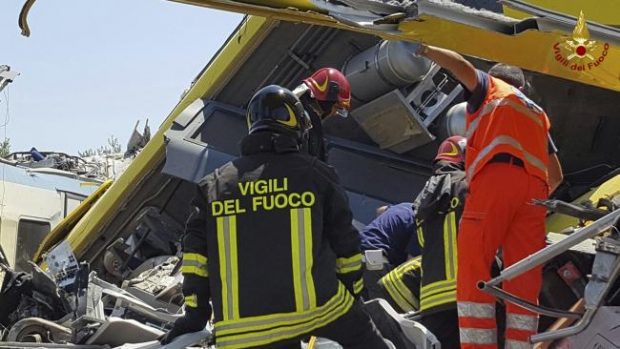 Dozens of others were injured when the two trains, each with four cars, collided head-on near the town of Andria on a line with just a single track, according to news agency ANSA and Sky TG24.

A still photo of the crash showed cars crumpled together and forced off the tracks at sharp angles. News reports said rescue workers were pulling victims from the rubble, including a small child who was alive. Video images showed ambulances responding to the scene with other rescue workers.

“Some of the cars are completely crumpled and the rescuers are extracting people from the metal, many of them injured,” Riccardo Zingaro, the chief of the local police in Andria, told ANSA at the scene.

National police and Carabinieri couldn’t immediately give details about the extent of the crash, saying they were in the middle of responding.

“It’s a disaster as if an airplane fell,” local Mayor Massimo Mazzilli said on his Facebook page, where he posted photos of the crash.

Italy’s prime minister, Matteo Renzi, said the train crash “is a moment of tears” and pledged not to stop until a cause was determined.

Renzi spoke in Milan but was returning to Rome to monitor the situation.

Ferrotramviaria is a Bari-based private train company that connects the capital of Puglia with regional towns to the north and the airport, operating about 20 small electric trains. It was founded in 1937 and serves students and commuters.

In a phone interview with state TV, Ferrotramviaria director general Massimo Nitti said the dynamics of what went wrong are still to be determined, but it is clear “one of the trains wasn’t supposed to be there” at the same time as the other.

For: At least 20 dead in a trains collision in Italy