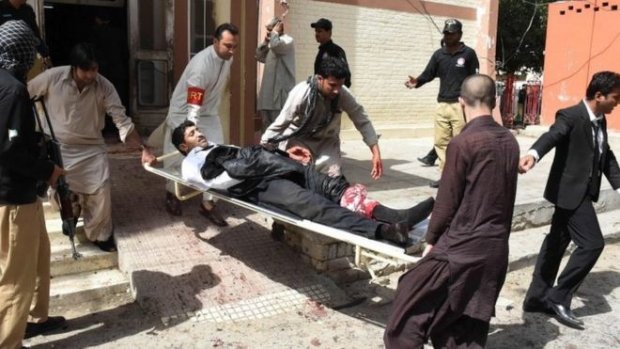 A suicide bomb attack has killed 63 people at a hospital in Quetta, in south-west Pakistan, officials say.

About 120 others were injured in the blast, which happened at the entrance to the emergency department where the body of a prominent lawyer shot dead earlier on Monday was being brought.

The casualties included lawyers and journalists accompanying the body of Bilal Anwar Kasi. Gunfire followed the explosion. It was not clear who the attackers were.

Mr Kasi, who was president of the Balochistan Bar Association, had been shot by two unknown assailants while on his way from his home to the main court complex in Quetta.

Pakistani Prime Minister Nawaz Sharif expressed his “deep grief and anguish”, adding: “No-one will be allowed to disturb the peace of the province. The people, policy and security forces in Balochistan have given sacrifices for the country.”

The president of Pakistan’s Supreme Court Bar Association, Syed Ali Zafa, denounced the assault as “an attack on justice”.

The Chief Minister of Balochistan, Sanaullah Zehri, said those injured should be given the best medical treatment and facilities available.