Dozens killed as airstrikes continue to his civilians in Aleppo 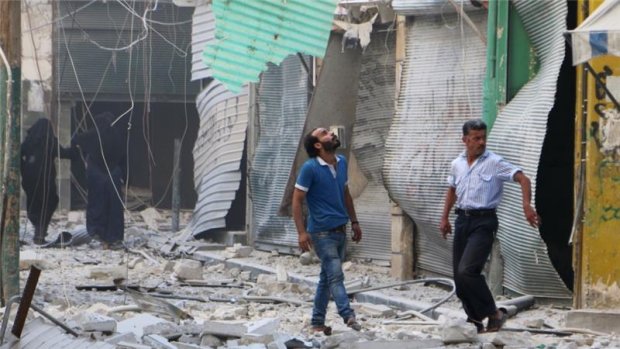 Air strikes in Syria’s divided city of Aleppo have killed dozens of people, according to a monitor, as fighting intensifies across the country despite UN appeals for greater humanitarian access and the resumption of peace talks.

The UK-based Syrian Observatory for Human Rights said on Tuesday that Syrian government helicopters targeted the al-Mashhad neighbourhood in the rebel-held half of the city, killing at least 18 people.
Aleppo’s residents plea for unity among armed Syrian opposition

The Observatory added that the number of casualties was likely to rise due to the high number of people critically wounded.

Zouhir Al Shimale, an Aleppo-based journalist, said air strikes, including on a residential building, have killed at least 32 people over the past two days.

“Residents say the building was full of families [internally displaced] from other areas,” he told Al Jazeera by telephone.

Separately, at least 42 civilians were killed on Monday in Syrian government air strikes on al-Atareb, a city in the Aleppo province

For: Dozens killed as airstrikes continue to his civilians in Aleppo